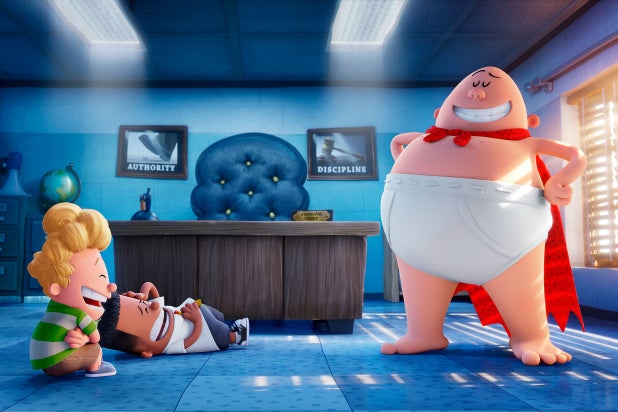 It’s hard to say the name “Captain Underpants” without smiling, and the big-screen debut of the skivvies-clad superhero (the film’s subtitle is “The First Epic Movie”) maintains that same goofy, innocently naughty nature for nearly its entire running time.

Yes, there are farts, and musical numbers choreographed around infinite rolls of toilet paper, and an arch-nemesis named Professor Poopypants; at the preview screening I attended, kids were delighted, and so were more than a few adults who were willing to surrender to the animated feature’s grammar-school scatology and loopy, anything-for-a-laugh ethos.

Adapted by Nicholas Stoller (“The Muppets”) from the popular books by Dav Pilkey, “Captain Underpants” has the breathless pacing and constantly-topping-itself narrative that suggest a sugar-stimulated youngster spinning a yarn with frequent use of “and then.” And while the Captain gets the title, it’s two youngsters who are the focus of the story: Best friends and neighbors George (voiced by Kevin Hart) and Harold (Thomas Middleditch) love to make each other laugh, particularly by collaborating on the comic-book adventures of their nearly-naked hero.

Their boisterousness and love of pranks have made them the target of their school’s authoritarian principal, Mr. Krupp (Ed Helms), but when Krupp threatens to end their friendship by putting them in separate classes (on opposite ends of, gasp, a really long hallway), George uses a hypno-ring from a box of cereal to make Mr. Krupp think that he is Captain Underpants. This switcheroo comes with its own problems, since Captain Underpants is a famously dense hero — and even worse, the hypnotized Krupp thinks that he has the character’s superpowers, which include the ability to fly.

George and Harold are going to need a hero when the nefarious Professor Poopypants (Nick Kroll) gets a job as their new teacher; for obvious reasons, the mad scientist loathes laughter, especially from kids. But the professor hatches a scheme to use the unusual brain of brown-noser Melvin (Jordan Peele) — “You’ve got no sense of humor!” exclaims the Professor. “Like a chair, or a supermodel!” — to squelch the mirth of children everywhere.

“Captain Underpants” has no shortage of inflatable gorillas and giant robotic toilets, but it’s the humanity that makes the movie work: Stoller and director David Soren (“Turbo”) always keep George and Harold’s friendship — and their desire to liberate their fellow students from Krupp’s tyranny — front and center, and the film captures the delight of kids being kids (there’s a fun song about the joy of Saturdays) without ever being too squicky or precious about it.

(Granted, there are some slow bits, but the film operates at such a generally fast pace, it’s perhaps inevitable that it occasionally needs to catch its breath.)

The voice performances are essential to making this all work: Hart and Middleditch have a youthful breeziness and openness without ever reverting to condescending “kiddie” voices, and while Helms’s Krupp is fearsome, his Captain Underpants is a doofus delight, all the way down to his catchphrase of “Tra La Laaaa!” Kroll’s vaguely Teutonic accent is deliciously over-the-top in a way Mel Blanc would admire.

The film’s animation finds a happy medium between the intentional pencil-sketch look of the books’ drawings and a more realistic CG style, and since the lead characters are themselves comic-book artists, the movie allows them to guide the storytelling to flip-books and even sock-puppet theater at appropriate moments in the plot.

Throw in a heroic theme song by “Weird Al” Yankovic, and “Captain Underpants” covers all the bases as both a hilarious comedy and a rousing adventure.