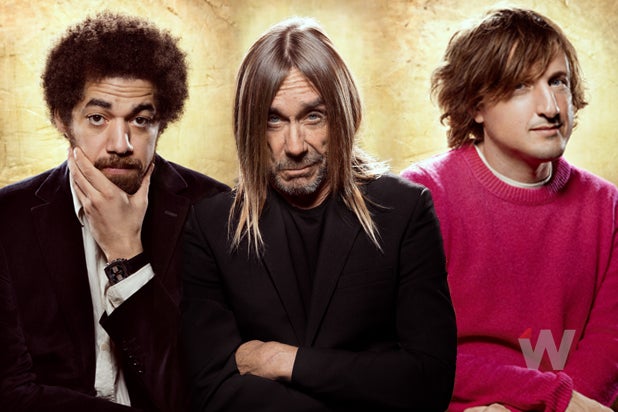 The songwriters break down the process:

But Stephen kept pushing. He came ’round to my house with these really beautiful lyric ideas. I’d go through it and go, “That bit’s great. That line, ‘doubled up and doubled down,’ we’ve got to use that.” At the beginning of the day I was thinking, “This is not going to happen, but I don’t want to upset the director.” But by the end of the day, we had something. And I said, “You know what? If somebody was singing this who could sing, this could be pretty good.”

But then I got pulled back into mixing the score, and Stephen said, “I can reach out to my friend Danger Mouse, and see if he would like to get involved.” And I said, “That would be amazing.”

DANGER MOUSE Stephen called me and said they were almost done with the movie, but he felt like there was this part for an original song. I’ve been friends with Stephen for years, so I went and saw the movie and liked it a lot, and I sat with the scene for a bit.

Daniel had worked on this piece of music, and I listened to it and was in right away. I started hearing melodies, started getting ideas. And when I thought of the kind of voice that could really work, somebody who had a deep voice and could be calm and have intensity, I thought of Iggy. So I called Iggy to see if it was a possibility, and he said he had a week free.

I said, “S—, we gotta get to work on this song.” So we booked our tickets to Miami to go see him, and we went over melodies and lyrics and everything. And then Iggy went and saw the movie, and Stephen and I worked on the song for a couple of days in the hotel room. I had to sing it myself, so I’d go into the bathroom and try to sing in my Iggy voice. And I said to Stephen, “Wait ’til Iggy gets it, you’ll see why I want him.”

And then I went into the studio with Iggy and did a lot of takes. And Stephen said, “Oh, I see why.”

IGGY POP It was on my few days off from my grueling schedule, and at first I was a little bit of a grumpy old man. I was thinking, “Look, this is going to be some damn film director who doesn’t know s— about music, and he’s going to end up not using the song.” But Brian said, “No, it’s a very good film,” and I saw that I could do something that would wend its way into the story.

I did a lot of practice with my car stereo, singing over and over to the track — not to develop a performance, but just to interiorize the lines. And then we got in the studio and I sang it 50, 60 times. A lot. That started to break me down a little bit to the point where I was like the guy in the movie. The money’s gone, everybody’s a crook, all right, whatever. That was the approach.

And Brian directed the vocal very particularly. “I like this, I don’t like that. this syllable, not that syllable. I like it when you breathe here, not there.” It helped me restrain a lot more than I ever had in a performance. I did hit a couple of Iggy notes toward the end, but that was at Brian’s urging. He said, “Give it a little Iggy shtick.”