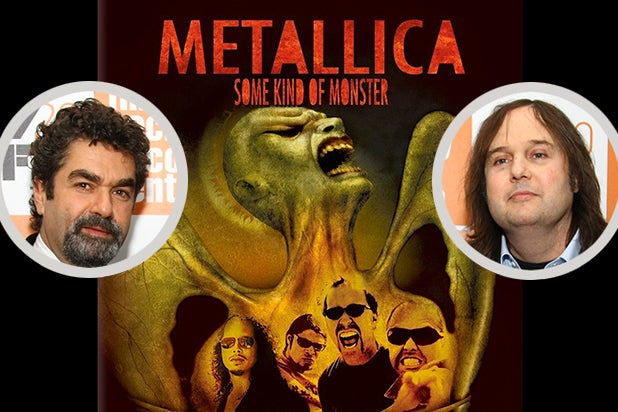 “Metallica: Some Kind of Monster” was lauded in 2004 for its honest examination of one of the world’s most successful heavy metal bands teetering on the brink of implosion. But a decade later Metallica’s drummer Lars Ulrich and directors Joe Berlinger and Bruce Sinofsky revealed how the documentary also helped guide them through low points in their professional careers.

“The making of the movie was one of the most extraordinary experiences in my life,” Berlinger told TheWrap. “Precisely because it came at such a vulnerable time.”

But the movie didn’t just document Ulrich and frontman James Hetfield’s contentious relationship; it affected it. The drummer says the filmmakers helped the band avoid a potential train wreck, in fact.

“The presence of the cameras helped keep the process on track,” Ulrich told TheWrap. “There was another set of eyes and ears there. Sometimes when somebody else is in the room, you watch your p’s and q’s a little more. I think it kept the whole thing from derailing in some peculiar way.”

Berlinger’s vulnerability, meanwhile, stemmed from a different strained relationship and a failed film. After codirected several acclaimed films with Sinofsky, including “Brother’s Keeper” and the first two entries in the “Paradise Lost” trilogy, Berlinger felt he had “outgrown” the pairing. He dissolved the partnership and ventured off to direct a scripted horror sequel by himself — “Book of Shadows: The Blair Witch Project 2.”

“It was a fucking disaster,” Berlinger said. “The movie was taken out of my hands, it was recut, it was not the movie I had shot and directed. It got horrible reviews.

“It was like this belly flop on a worldwide stage, and I was devastated,” he added.

The director admits he was depressed for months before finally reaching out to Ulrich, whom he had befriended years earlier when securing the rights to “Sanitarium,” a Metallica song vital to “Paradise Lost.” As it turned out, the massively popular band was gearing up for a new album, a follow-up to 1997’s “Reload,” which went platinum several times over. The label, Elektra Records, commissioned Berlinger to direct a behind-the-scenes doc about the making of the new album.

But the project took an unusual turn very early when Metallica bassist Jason Newsted quit the band. Tensions were high all around, especially between Ulrich and Hetfield, so the label brought in reinforcements — a de facto therapist named Phil Towle. His sessions, which cost Elektra $40,000 per month, helped to heal Berlinger, too.

“That first therapy session was just me and a camera listening to these icons of metal … obviously going through the same creative and existential crisis I was going through on a much smaller level,” Berlinger said. “It just was so empowering. I sat there looking through the viewfinder thinking to myself, I don’t know how I got here, I don’t know why these guys are letting me film this. But this is exactly what I need to hear at this precise moment.”

Berlinger knew he had stumbled across something special and unique with the unfiltered access he had to a world-renowned band at a crisis point. But something was missing.

“I realized I had been abrupt in breaking up with Bruce,” he said. “It was a long-simmering feeling that had been brewing for a long time … It was more my ego issues of having a partner than his ego issues. But I realized that I had to include him in the making of this film.

“By watching James and Lars go at it in those initial sessions, I realized I had my own unfinished business with my own collaborator,” he continued. “I was glad on many levels to have him be part of the film … I thought our collaborative relationship deserved to be worked on.”

So he reached back out to Sinofsky who was immediately enthralled. “A group of men going through a crisis, no different than anyone else,” Sinofsky said. “It was fascinating.

“The making of ‘Some Kind of Monster’ changed our working relationship. Our personal relationship was probably [changed] too,” he continued. “It helped us make a great film, but it allowed us to continue working with each other the way we used to … It was definitely therapeutic, but didn’t cost us $40,000 per month.”

But while Sinofsky and Berlinger reconciled behind the scenes, Metallica flirted with disaster in front of the cameras. The band members had grown accustomed to avoiding conflict, but the ever-present camera crew was adding in new tensions and keeping a record of every word and action. Always being “on the record” suddenly forced them to deal with their issues.

See photos: Is This the Death of the Big Screen Documentary?

“We were at a crossroads,” Ulrich explained. “We had been really good at being able to compartmentalize a lot of this stuff. Suppress it with drinking or other extravagances. This was the first time we had to talk to each other, get to know each other and work stuff out … The cameras were there catching all of it.”

Indeed, the cameras even continued rolling when Hetfield left the recording studio to seek rehabilitation for substance abuse. After decades of drinking before each set, the rock ‘n’ roll lifestyle had caught up to him.

“Hetfield went away, but we said why don’t we keep filming because we think it’s interesting,” Ulrich said. “We said, ‘We trust you guys.’ And they ended up being another set of eyes and ears in those rooms for the next 18 months as we dealt with the aftermath of Hetfield going away and all of the subsequent domino issues that came in the wake of that.”

Hetfield eventually sobered up and Metallica completed “St. Anger,” but there were other bumps in the road: For starters, the record label reportedly wanted to scrap the idea of a film altogether and asked Berlinger to edit the footage into episodes. It was hoping to package the dysfunction for TV and create a hit series comparable to MTV’s “The Osbournes,” which also featured aging rockers and was all the rage.

“I thought that was a horrible idea,” Berlinger said. “I thought it was going to trivialize this incredibly honest footage we were getting.”

So he pleaded his case to the band. “If you let this go on television as a reality TV show, your audience will assume therapy was a premeditated television concept,” he said. “That you went into therapy because somebody wanted to do a TV show about you guys … This deserves to be a movie.”

Metallica agreed. The band reportedly cut Elektra a seven-figure check in order to take ownership of the film, which was still in production.

“It put us in a philosophical quandary,” Berlinger explained. “As a documentarian, you don’t want the subject of your movie to pay for it for lots of reasons, most notably who is going to have control of the final product?”

Metallica, its representatives and the filmmakers screened a rough cut of “Some Kind of Monster” at at George Lucas‘ Skywalker Ranch. When the film ended, Ulrich, Hetfield, guitarist Kirk Hammett and new bassist Robert Trujillo were stunned silent.

They had objections. Many of them. But ultimately the band felt the film was a truthful portrayal and never pulled their trump card. Berlinger said the filmmakers “got final cut in a situation where it could’ve been the exact opposite.”

“Metallica: Some Kind of Monster” was released to to rave reviews, won an Independent Spirit Award and wound up cracking the top 10 on Rolling Stone’s list of rock docs. Many film critics came to appreciate the band for the first time, but some heavy metal fans were turned off by the Hetfield and Ulrich’s deep dive into their own feelings.

“As much as you want to control how people react, there are always things that throw you for a loop,” Ulrich explained. “The fact that the music world was a little bewildered by it and the fact that the movie world sort of embraced the film was not something we would’ve predicted.”

Berlinger thinks fans of heavy metal should be impressed by the band’s courage.

“On the one hand this film is very much about deconstructing the image of heavy metal and making these guys appear human,” he said. “But having the balls … to allow their image to be so deconstructed is like the ultimate in metal.”

Ten years later, Berlinger and Sinofsky have collaborated on several additional projects, including “Paradise Lost 3: Purgatory,” which netted them an Oscar nomination. They also coproduced a follow-up short to “Some Kind of Monster” called “Metallica: This Monster Lives,” which is also the name of a book Berlinger cowrote with Greg Milner about the making of the feature length film.

Metallica, meanwhile, is still Metallica. The band followed up “St. Anger” with another multiplatinum studio album, “Death Magnetic” in 2008, started record label Blackened in 2012 and continues to pack stadiums in every major cities across the globe.

It’s strange to think that if “Blair Witch 2” would’ve been anything but an unmitigated disaster, Artisan likely would’ve exercised the its multipicture option on Berlinger and “Some Kind of Monster” would have never happened. But fate had kinder things in store for all involved.

“James said it helped saved his marriage, helped save the band,” Sinofsky said. “Metallica is still together, and they’re still playing great music. They didn’t lose a step. They stumbled, but they were able to get back on their feet.”

“Metallica: Some Kind of Monster” is now available digitally and on Blu-ray for the first time.