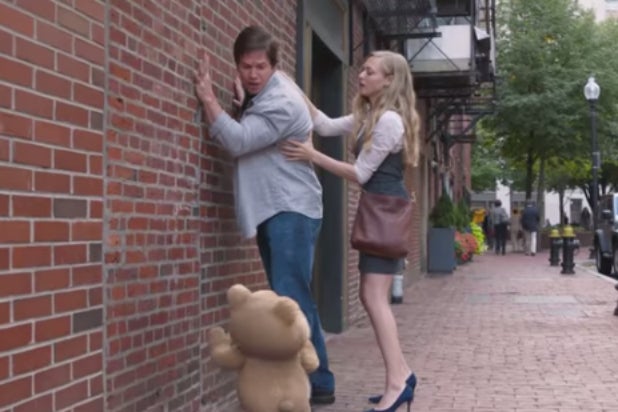 “Family Guy” creator Seth MacFarlane had a buzz-worthy hit on his hands in 2012 with “Ted,” which grossed $200 million domestically.

It was just a matter of time before the stoned bear and his thunder buddy wandered back into theaters, and as is the case with many sequels, “Ted 2” was not nearly as well-received as the original.

Universal’s raunchy R-rated release starring Mark Wahlberg and Amanda Seyfried has a mere 41 percent approval rating from critics on Rotten Tomatoes. Of the 32 reviews counted so far, only 13 were positive. “Ted” fared much better with 67 percent “fresh” reviews.

“There are some good laughs in this movie, as opposed to the bad laughs, the lame laughs and those non-laughs at Comic Con,” wrote TheWrap’s Dan Callahan in his review of “Ted 2,” but “bad taste needs to be more honest and more all-inclusive if it’s to make a lasting impression, and MacFarlane’s bad taste here is both too wishy-washy and too knee-jerk cruel to really make any impact.”

Most critics agree that “Ted 2’s” comedy is hit-or-miss, typical of the movie’s writer, director and star Seth MacFarlane. A scene that sees Wahlberg drenched in semen has been universally panned, but the movie’s other jokes range from “inspired” to “cringe-worthy” to “just stupid enough to click.”

Here are some of the reviews critics had to offer.

“I laughed three or four times, mostly at verbal byplay since director MacFarlane struggles when it comes to timing, filming and cutting sight gags, many of them (including the accident at the fertility clinic) straight out of his cash cow ‘Family Guy.’ There’s a riff on F. Scott Fitzgerald that works mysteriously well. The Liam Neeson cameo does, too. A lyric interlude, featuring Seyfried singing an original tune (‘Mean Ol’ Moon’) written by MacFarlane and composer Walter Murphy, resurrects the old joke about woodland creatures cooing over the female protagonist’s musical charms: When the lobster rolls up with the raccoon and the fawn, it’s just stupid enough to click.”

“Needless to say, this sequel is every bit as irreverent as the dispiritingly profitable 2012 original with which ‘Family Guy’ creator Seth MacFarlane transitioned his brand to the big screen. Whether or not that’s a good thing will vary on an individual basis, but if you’d like to watch Mark Wahlberg accidentally get drenched in human sperm, you’ve come to the right place.”

Also read: 'Ted 2,' 'Jurassic World' and 'Inside Out' Could Make Box Office History

“Even a comedy about a talking teddy bear needs to have a vague concept about how real people behave, and the consequences of that behavior. MacFarlane doesn’t know or doesn’t care — and the story ends with Ted and John no wiser than they were at the beginning.”

“The film, like most of MacFarlane’s work, is a mix of occasional laugh-out-loud moments — there are some here — and cringe-worthy misfires that play a lot more tone-deaf than he seems to intend.”

“Plenty of decent movies have been built on flimsier narrative scaffolding than ‘Ted 2’s,’ but MacFarlane and writers Alec Sulkin and Wellesley Wild are smarter than a lot of the material they’ve come up with here. Sure, some of their jokes are inspired (Liam Neeson stealthily buying a box of Trix cereal worried that it’s just for kids; a series of jabs at Seyfried’s Gollum-esque saucer eyes), but too many are just loutish and lazy and don’t land.”

“‘Ted 2’ is the equivalent of a middle school bully. It’s not as funny as it thinks it is. Its penchant for casual cruelty masks a hollow soul. And it will be totally forgotten once we move onto bigger and better things.”

“One could argue ‘Ted 2’ represents an evolution in MacFarlane’s comedic sensibility. It pines for a utopia where audiences understand that a joke about Charlie Hebdo is not actually belittling tragedy, and might even take the edge off the unspeakable. Other times it’s just an inconsistent comedy, albeit one that can even hit hard with a leftfield ‘Jurassic Park’ more joy-making than anything in ‘Jurassic World.’ It arrives in a climate sick with touchiness, and though it doesn’t make that explicitly its subject, you can sense a comic trying to use jokes to ultimately chill people out. Some of them are even funny.