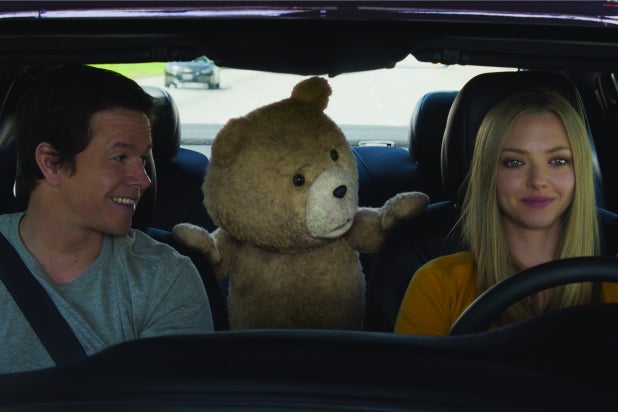 Toward the end of “Ted 2,” writer-director Seth MacFarlane‘s sequel to his popular movie about a stuffed bear that comes to very crude life, the swaggering and pointedly gay Guy (Patrick Warburton) walks around New York Comic Con randomly attacking nerdy attendees. While MacFarlane clearly doesn’t stage this bullying to get laughs, presenting this arbitrary cruelty in a fairly neutral way, there seems to be a little voice underneath that says, “Don’t these losers sort of deserve it?”

This sequence doesn’t display all-out malice, but rather sucker-punch meanness, smacking someone in the face when they least expect it. That tone is typical of MacFarlane’s comedy; his tone is so slippery that the nastiness of his sensibility sometimes knocks you out before you can steel yourself against it. But if “Ted 2” contains any real surprises, it’s that long stretches of what’s supposed to be a ribald comedy are spent on a soapbox making Message Movie speeches.

In the opening scene, living toy Ted gets married to Tami-Lynn (Jessica Barth), after which he tells his bride at the reception, “I’m going to go ’50 Shades of Bear’ on you tonight.” But soon their marriage is on the rocks, prompting the pair to try to have a baby to solidify their relationship. Ted, lacking the necessary anatomy, turns to his friend John (Mark Wahlberg) as a donor, leading — of course — to a scene in which Wahlberg knocks over a shelf of samples and gets drenched in semen.

After this sticky gross-out sequence, things get very high-minded: When Ted and Tami-Lynn try to adopt a baby, our bear is told he has no rights as a human being and that the state considers him property. So Ted and John hire Samantha (Amanda Seyfried), a young lawyer who shares their passion for smoking pot, to defend Ted in court as he tries to prove his rights. MacFarlane draws many comparisons between Ted’s legal plight and the plight of African-Americans under slavery and one comparison about the plight of gay people trying to win civil rights in this day and age. Though MacFarlane makes obsessive jokes about blacks and gays, most of them are unexpected, sharp, and layered, so that they don’t merely prompt knee-jerk offense.

Yet when it comes to women, MacFarlane shows that he is not an equal opportunity offender. During one scene at a diner, when Ted is talking about women making eyes at John, Samantha asks what her eyes are like, and Ted says, “You have ‘Give me the ring, my precious’ eyes.” This gets a laugh at Seyfried’s expense, but it’s an uncomfortable one. It’s like that moment in the Farrelly Brothers’ “Me, Myself & Irene” (2000) where Jim Carrey tells Renée Zellweger that she has a face that’s “pursed up like you just sucked on a lemon.” This is the kind of joke that gets a laugh of recognition, but it’s so heedlessly not-nice that the laugh really isn’t worth it.

Yet MacFarlane doesn’t stop with that one mean line: He makes an ongoing running gag of Gollum references for the rest of the movie. After the second one, they begin to leave an extremely sour taste, and you start noticing how often MacFarlane has set up his camera to ogle Tami-Lynn’s behind in her tight clothes.

(Wahlberg, meanwhile, endures some gross-out and gay-panic humor here, but he also has sexy young women throwing themselves at him all through the movie without irony. This obvious display of Wahlberg’s power as a star is never questioned once by the supposedly relentless jokester MacFarlane, himself a rich and powerful guy.)

MacFarlane very clearly wants to be taken seriously as a progressive liberal for long stretches of “Ted 2,” but maybe even this is just a cynical pose. There are some good laughs in this movie, as opposed to the bad laughs, the lame laughs and those non-laughs at Comic Con. (Liam Neeson is, admittedly, unexpectedly funny in a brief bit that sends up his gloomy image.) But bad taste needs to be more honest and more all-inclusive if it’s to make a lasting impression, and MacFarlane’s bad taste here is both too wishy-washy and too knee-jerk cruel to really make any impact.