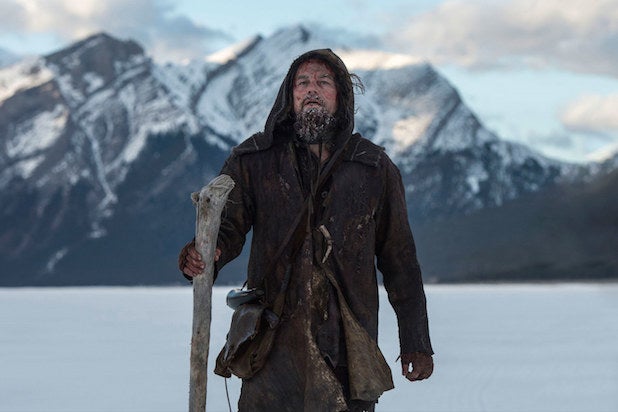 With one week to go before Academy Awards ballots are due, and the major Hollywood guilds split between “The Revenant,” “The Big Short” and “Spotlight” with their top picks, the Oscar race remains baffling.

But if there’s a consensus frontrunner at this point, it’s Alejandro G. Inarritu’s “The Revenant,” which in recent weeks has won the top award from the Directors Guild of America, the American Society of Cinematographers and the British Academy of Film and Television Arts (BAFTA).

There are convincing signs why “The Revenant” should be a slam-dunk winner, but also persuasive reasons why “The Big Short” or “Spotlight” can take the prize as well.

Let’s look at a few of the reasons:

CAN’T LOSE: Other Awards
“The Revenant” was named the best dramatic film of 2015 at the Golden Globe Awards on Jan. 12, Inarritu won the top award from the Directors Guild of America four weeks later and the film won BAFTA’s Best Film award on Sunday.

In the more than 60 years that the three organizations have been giving out awards, 13 films have won all three, and 12 of those have gone on to win the Oscar for Best Picture. The only one that did not was “Brokeback Mountain” in 2006, which was dealing with the kind of resistance from conservative voters that “The Revenant” won’t face.

Over the years, the DGA has been the most reliable precursor award, so Inarritu’s win means a lot.

CAN’T WIN: No Oscar Screenplay Nomination
If you’re into Oscar stats, this is “The Revenant’s” biggest Achilles heel: It was not nominated for Best Original Screenplay.

In the last 81 years of the Oscars, only three times has the Best Picture winner not been nominated in that category: “Hamlet” in 1949, when the voters probably gave all the credit to an ineligible guy named Shakespeare; “The Sound of Music” in 1965, when they did the same for original Broadway writers Howard Lindsay and Russel Crouse rather than credited screenwriter Ernest Lehman; and “Titanic” in 1998, when James Cameron‘s epic won 11 awards but wasn’t even nominated by the writers.

The advantage for “The Revenant” is that while “Titanic” probably wasn’t nominated because its dialogue was lousy, Inarritu’s movie probably wasn’t nominated because its dialogue was minimal. Last year, the director won with “Birdman,” a movie that didn’t get an editing nomination (another must-have category, conventional wisdom said) because it looked like it was filmed in one long shot; this year, he could win with a movie that didn’t get a screenplay nomination because its lead character is by himself and too injured to talk for most of the film.

CAN’T LOSE: More Oscar wins than its chief rivals
You don’t have to be Oscar night’s top winner to take the Best Picture award, but statistics suggest that you do have to win at least three Academy Awards to be a credible best-pic contender.

The Best Picture winner had only one or two wins seven times in the first 13 years of the Oscars, when there were far fewer categories – but it has only done so once in the 73 years since then, and not at all since “The Greatest Show on Earth” in 1953.

That’s a string of 62 straight Oscar shows in which the Best Picture winner had at least two other wins. It should be easy for “The Revenant” to hit that mark, since it’s a prohibitive favorite in the Best Director, Best Actor and Best Cinematography categories, and it has a real shot for production design, makeup and hairstyling, film editing, costume design, visual effects and both sound categories.

But how will “Spotlight” or “The Big Short” get those two other wins that are all-but-required to be a Best Picture winner? The former seems likely to win in the Original Screenplay category, the latter in Adapted Screenplay. But aside from those, there are no categories in which either of the films is favored.

“The Big Short” has a chance at an upset in Best Film Editing – and if that happens midway during the show, it’ll be a strong tipoff that Adam McKay‘s film will win Best Picture. McKay could conceivably win director, though that would be a monumental upset after he didn’t win at the DGA.

As for “Spotlight,” its other nominations are directing (which would take another huge upset, since it’s the least flashy of the five nominees), film editing (ditto, though the fact that it was nominated shows the Academy takes it seriously) and supporting actor and actress for Mark Ruffalo and Rachel McAdams, neither of whom are favorites.

CAN’T WIN: The Producers Guild Award
This is even more troubling for “The Revenant” than the lack of a screenplay nomination: It lost the Producers Guild Award to “The Big Short.” Since the Academy expanded from five to 10 Best Picture nominees in 2009 and the PGA followed suit, no film has won the top Oscar without first winning with the producers.

In that time, the PGA has been the ironclad precursor award: If you want to win the Oscar, you have to first win the PGA. And the one semi-exception to the rule doesn’t work in favor of “The Revenant,” either: Two years ago, the big and dazzling “Gravity” tied for the PGA Award with the smaller, more serious “12 Years a Slave,” but then lost the Oscar to “12 Years.”

So if this year’s big and dazzling movie can’t even tie the smaller, more serious movie with the producers, can it win with the Academy?

CAN’T LOSE: The Wow Factor
“‘The Revenant’ is like nothing I’ve ever seen before,” said one Oscar voter whose tastes usually run to artier fare. “This is too much of a movie-movie to dismiss,” wrote another.

“The Big Short” and “Spotlight” have a lot going for them, but they don’t have the epic scale and the wow factor of “The Revenant” — and there’s certainly no other scene that has been as talked-about this year as the one in which Leonardo DiCaprio faces off with an angry mother bear.

There was a time when that would have almost guaranteed a win, though the recent examples of “12 Years a Slave” beating “Gravity” and “The Hurt Locker” beating “Avatar” show that the Academy has changed.

Still, it’s the one big contender that can, in the words of Best Picture winner “Chicago,” give ‘em the old razzle-dazzle.

CAN’T WIN: The Preferential System
No movie is going to run away with this year’s Oscar race, so a complicated system of vote-counting, used only in the Best Picture category (and, crucially, at the PGA), will come into play heavily. To win under the preferential system, a movie must be a consensus favorite – not only ranked first on a large number of ballots, but also ranked second or third on the ballots of films that don’t have as much support.

So the real battleground will most likely be on the ballots of voters who put “Brooklyn,” “Bridge of Spies,” “Room,” “Mad Max: Fury Road” and “The Martian” at the top of their ballots. When those other films are eliminated from contention and those votes slide to the highest-ranked of the top contenders, where will “The Revenant” be?

Anecdotal evidence suggests that it might be the most love-it-or-hate-it movie in the top three, landing on most ballots either at the top or near the bottom. If so, “The Big Short” or “Spotlight” could sneak in and become the consensus favorite even if “The Revenant” has more No. 1 votes.

CAN’T LOSE: Momentum
“The Revenant” has momentum on two different fronts, both crucial. A week before Oscar voting began, it won the Directors Guild Awards; two days after voting started, it won BAFTA and ASC. It’s the movie that seems to be surging at the right time, the recent WGA wins for “The Big Short” and “Spotlight” notwithstanding.

And it’s also a movie that is making far more money than anyone expected. A risky gamble that went well over budget and seemed destined to be a big money-loser, it instead has grossed more than $160 million in the United States and another $200 million overseas, thanks in no small part to Leonardo DiCaprio‘s stardom.

CAN’T WIN: Importance
This was the fight two years ago, when Alfonso Cuaron‘s “Gravity” lost the top prize to Steve McQueen‘s “12 Years a Slave.” Academy voters like to go for Movies That Mean Something, and that inclination might be particularly pronounced in a year in which many of them have been told that they’re old and out of touch.

“Spotlight” is about journalism, about sexual abuse and coverup in the Catholic Church, about the power of the press to hold those in high office accountable; it has screened at the Vatican. “The Big Short” is about the financial crisis of 2008, about the ordinary people who lost their homes and the bankers who were never held accountable; it screened in Washington last week.

Both films can play (and are playing) the importance card – and while Inarritu has talked of manifest destiny and environmental issues and the treatment of Native Americans, his film is, as the one voter said, a “movie-movie,” not an issue movie.

And a week and a half until we know which reasons were right and which were wrong.