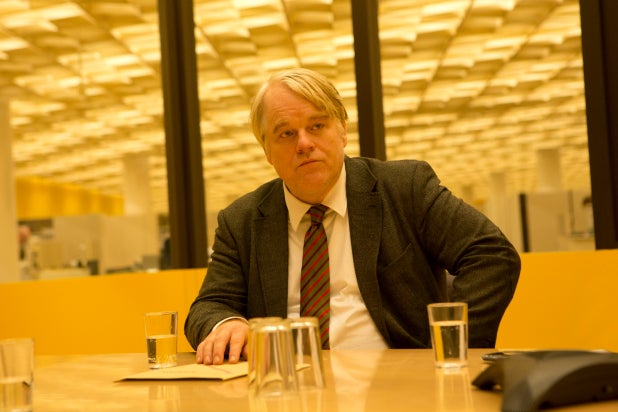 As we’ve learned from countless novels, movies, and TV shows over the years, the great spies glean information by distracting their marks with one narrative, all the while subtly weaving a separate, hidden agenda.

That’s a concept that works for screenwriter Andrew Bovell (“Lantana,” “Head On”) and director Anton Corbijn (“The American,” “Control”) in their big-screen adaptation of John le Carré’s “A Most Wanted Man.” There are a lot of characters and events for the audience to process and digest, but all the while it’s the film’s theme that sneaks up and overtakes the plot, making for a powerful climax.

Not unlike the recent film version of le Carré’s “Tinker, Tailor, Soldier, Spy” — as well as Corbijn’s earlier movies, of course — “Most Wanted” can often be a chilly bit of business, but it’s no less gripping for its emotional distance, thanks mostly to a superb cast led by the late Philip Seymour Hoffman.

Hoffman stars as grizzled German spymaster Günther Bachmann, who runs an off-the-books agency in Hamburg that engages in activities that no government wants to acknowledge. In the months after 9/11, the intelligence community is on high alert to make sure that another Mohammed Atta doesn’t slip through its fingers, which means the police and other above-board keepers of the peace are out to make showy arrests to keep the peace and to reassure the public.

For Bachmann, this kind of grandstanding is far too shortsighted; “It takes a minnow to catch a barracuda, and a barracuda to catch a shark.” “I don’t fish,” huffs a government higher-up in reply, but for Bachmann, the low-level flunkies need to be kept on the street as informants and as bait to attract much bigger seafood.

It’s in the midst of this turmoil that Russian-Chechen refugee Issa Karpov (Grigoriy Dobrygin, with the haunted eyes of a soldier in a Goya painting) literally washes ashore. Do-gooder immigration attorney Annabel (Rachel McAdams) wants to help him get a passport, but after Bachmann and his team bring her in for questioning — and several days’ worth of subtle manipulation — she agrees to help use this minnow to attract barracuda Abdullah (Homayoun Ershadi), whose charities might be funneling capital to terrorist organizations.

The German cops want to bring Karpov in immediately, but American agent Martha (Robin Wright, in an unconvincing brunette bob) has an agenda of her own — it’s a treat to watch Wright and Hoffman go head-to-head, trying to figure out each other’s intentions. They both have a way of making the phrase “making the world a safer place” sound simultaneously sincere and cynical.

Also read: John le Carre on Philip Seymour Hoffman: ‘He Was Burning Himself Out Before Your Eyes’

The performances are terrific — Willem Dafoe plays a banker connected to Karpov because of their fathers’ business arrangements, and I would have liked to have seen more of Daniel Brühl as one of Bachmann’s lieutenants — and the script keeps the story moving along while giving us little moments of character insight. (Both converted Muslim Karpov and slumming rich-girl Annabel share an impulse to make life choices that rebel against their bad daddies.)

Hoffman doesn’t get a lot of flashy, awards-show-clip moments, but he’s all the more engrossing for underplaying and revealing volumes with the slightest of reactions and inflections.

“A Most Wanted Man” consistently engages the eye as well, from the steely cinematography by Benoît Delhomme to the shrewd use of Hamburg’s Brutalist architecture. In “Tinker, Tailor,” that style of design placed the characters precisely in their 1970s milieu; here, it traps Bachmann in a labyrinth of bureaucracy and outmoded ways of thinking.

If you’ve seen “The American,” you know that Corbijn doesn’t make the kind of movies that put him on the shortlist to direct the next 007 saga. Those who like their spies melancholy and nicotine-stained will find Philip Seymour Hoffman no less fascinating as a master of espionage.