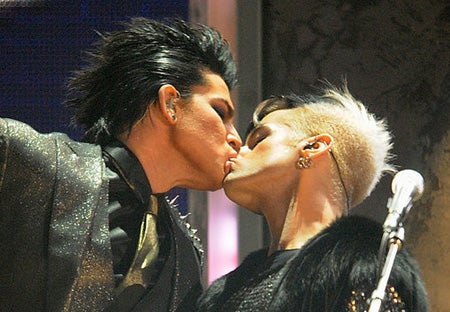 The backlash against Adam Lambert’s instantly infamous American Music Awards show appearance – in which the “American Idol” kissed a male dancer, simulated oral sex with another and flipped off the crowd — has begun.

First, there were the reported 1,500-plus complaints called in to ABC during and after the show aired. This pales in comparison to the 500,000 complaints logged over Janet Jackson’s wardrobe malfunction, although that was during the Super Bowl. (The AMA broadcast drew 14.2 million overall viewers for ABC.)

Then there was this statement of feigned shock by Dick Clark Productions: "Due to the live nature of the show, we did not expect the impromptu moment in question."

Now, according to Perez Hilton, Lambert’s appearance on ABC’s “Good Morning America,” which had been scheduled for Wednesday, has been canceled. (Lambert is scheduled to make an appearance on CBS’ “Early Show” on Wednesday as well.)

I asked ABC why Lambert’s planned performance was squashed. I’ll update this post if/when I hear back. In the meantime, Hilton has a rather obvious theory:

Translation: The network is upset with Lambert’s homoerotic American Music Awards performance on Sunday and afraid of what he will do on live, morning television.

Or, perhaps a more direct translation translation: The network is afraid advertisers will get upset if they allow Lambert — who already gave them a headache with his homoerotic AMA performance — to perform the day before Thanksgiving on their Disney-owned morning show.

Note: I was hoping to embed an uncut video, but Dick Clark Productions is putting the copyright kibosh on YouTube uploaders. Luckily, Rolling Stone has a photo gallery of the Glamert performance. Click here to view.