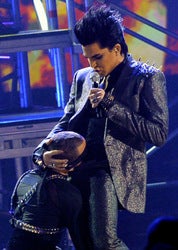 ABC has received complaints from more than 1,500 people about Adam Lambert’s risque, sexually charged performance at Sunday’s American Music Awards, according to the Associated Press.

The network characterized that volume of response as "moderate." Nielsen Co. ratings show about 14.2 million people watched the show.

Lambert said before the performance that he wanted to break down the double standard that exists where female performers are often sexually provocative while men don’t do it that often.

The "American Idol" glam rocker sang his new song "For Your Entertainment" on Sunday’s show with an elaborate, S&M-themed production.

Lambert fondled a dancer, led another around on a leash, had a dancer briefly stick his head in Lambert’s crotch and kissed a man.

For the West Coast rerun, ABC censored out a moment when Lambert rubbed his crotch, according to show producer Dick Clark Productions.  (Also edited: a moment during Jennifer Lopez’s performance of "Louboutins" when she slipped and fell. "Execs and producers felt it was respectful to Ms. Lopez to edit the mishap for later time zones," the company said.)

"Female performers have been doing this for years — pushing the envelope about sexuality — and the minute a man does it, everybody freaks out," Lambert told Rolling Stone magazine after the show.
"We’re in 2009; it’s time to take risks, be a little more brave, time to open people’s eyes and if it offends them, then maybe I’m not for them. My goal was not to piss people off, it was to promote freedom of expression and artistic freedom,"  he said.
x
Looks like you're enjoying reading