ABC has given a 10-episode series order to the unscripted court show “Judge Steve Harvey,” the network announced Wednesday.

Per ABC’s description, the show will see Harvey “welcome a variety of conflicts and characters to his courtroom – from small claims to big disputes and everything in between.” He will decide cases using “his own life experiences and some good old common sense.”

The hour-long unscripted comedy will debut in 2022. 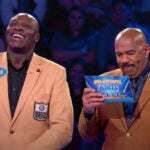