The Academy has tweaked its eligibility rules for the 2023 Oscars, reverting to the requirement that a movie must receive a theatrical release in order to qualify for awards consideration.

The Academy’s online Screening Room will no longer be a method of qualification, AMPAS said in new guidelines rules released on Wednesday. The qualifying eligibility period for the 95th Oscars will be Jan. 1, 2022 to Dec. 31, 2022.

And as theaters have reopened, the six qualifying U.S. metropolitan areas continue to be Los Angeles County; the City of New York; the Bay Area; Chicago, Illinois; Miami, Florida; and Atlanta, Georgia. These rules will also apply to General Entry categories as well as the Documentary and Short Film categories.

The Board of Governors has also set a limit on how many songs from one movie can be submitted for the Best Original Song category, limiting it to just three entries per film, among other changes.

In the documentary categories, the awards have been renamed to Documentary Feature Film and Documentary Short Film.

And finally in the Sound category, producers will be required to make their films available for viewing by Sound Branch members, particularly when the release date is after the preliminary voting cycle opens. Any special circumstances requests regarding eligible nominees must be received by the General Entry deadline of Nov. 15, 2022. Additionally, clips for the nominating screening (bake-off) shall not exceed 10 minutes of running time per title. 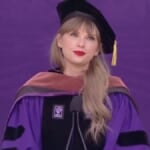 Also Read:
Taylor Swift Accepts Honorary Doctorate from NYU: ‘I’m 90% Sure That the Reason I’m Here is Because I Have a Song Called 22’ (Video)

As for the Academy Screening Room, it will still be made available for all eligible releases along with digital links provided under certain circumstances, but it no longer will count as a means to qualify for the Oscars. What’s more, film synopses on those titles may no longer contain credits, as film companies will now have the option to include credits on the Academy Screening Room prior to nominations.

You can see a full list of rules and other minor updated campaign regulations here on the Oscars website.

The Oscars next year will be held on Sunday, March 12, 2023, with nominations announced on Tuesday, Jan. 24.