It has finally arrived: The explanation as to why Seth Rogen was sitting front row at Adele’s TV concert special, “Adele One Night Only,” which aired Nov. 14 on CBS. And yes, he was high during the taping.

“Yeah, I was there. I was in the front row of the Adele concert. And that is as surprising to me as anyone because I had no idea I was attending the taping of an Adele television special at all,” Rogen told Jimmy Fallon on Wednesday’s “Tonight Show,” as he started the beginning of a very long explanation about how he ended up with the “most popular” part he’s ever had. “I got an invitation, ‘Do you want to go to a small Adele concert?’ is what I remember absorbing. And I go to my wife Lauren, ‘You want to go to this small Adele concert?’ ‘Great, sounds fun.’ ‘It’s at Griffith Park, that sounds good.’ So, if I’m being honest — I hate to burst everyone’s bubble, I smoke weed, Jimmy.”

After some laughter from the audience and Fallon regarding the “breaking news” there, the actor continued:

“So we’re like, ‘It’s an Adele concert! It’s in the park!’ We smoked a ton of weed and were like, ‘We’re just going to go and enjoy this lovely Adele concert.’ We pull up, and we see camera cranes. There’s drones flying around. There’s an entire crew there. And I’m like, ‘Oh no, we are at the filming of a television special, I think. We’re on a television show.’ And I’m like, ‘Maybe it’s not that big a television special.’ And then the first person I see is Oprah Winfrey. And I’m like, ‘Oh, no. I think it’s a big television special.’ And then me and my wife are like, OK, maybe we can just kind of slink into the background, you know? Like, we’ll just sit in the back. It’s fine. We’re not equipped mentally to deal with doing this right now, really. So we go up to the desk and they give us our tickets and are our seat numbers are literally 1A and 1B. And I’m like, ‘Oh, no. That sounds close!’ So we go to 1A and 1B and we’re in the front row. We’re front row center. We’re as close as you can fathomably be. I sit down, there’s like a camera literally just pointed at my face.” 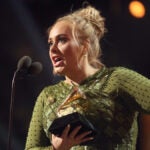 Fallon asked Rogen if he knows Adele personally, because that would help explain why he had such prime seating.

“I have never met– No! I don’t know Adele! And if, Adele, you’re watching this, why did you do that?” Rogen said. “Because the whole time I’m like, ‘There are so many more famous people than me here who should be sitting where I’m sitting.’ And I could just feel them be insulted that I had such a good seat. Like, I was in front of Drake. Like, there’s no world where I should be in front of Drake. How is that possible? And I could just feel like Drake’s eyes drilling into the back of my head like, ‘Why am I in 3R and he’s in 1A?’ I was six rows in front of Ellen DeGeneres and Kris Jenner. Like, I truly have no idea why they did that. It was truly wild.”

Rogen says the whole time he kept thinking to himself “just try to look cool, which is not a healthy thought to have.”

“And it was hard for me to look cool. I’m too close. I feel like Leonardo DiCaprio is thinking, ‘Did Seth Rogen write ‘Rolling in the Deep’? Is that why he’s so close?’ I feel out of place… I very actively tried to look like I’m enjoying this Adele concert, which I was, but I was very distracted by the fact that I was on camera. So I was playing the role of just an undistracted, normal, cool guy trying to enjoy an Adele concert.”

He continued: “But everyone I know watched it. I think it’s the most popular thing I’ve ever been in in my entire life. There’s people who I know have not watched my last five movies who have been texting me, being like, ‘That Adele concert looked incredible.’