Marvel Comics sparked a huge backlash this month after it launched its special, limited-time event “Secret Empire,” in which Captain America, as in the beloved superhero created to fight Nazis and defend core American values, was revealed to be… a Nazi.

Well, technically a member of Hydra — the Marvel universe’s Nazi-offshoot supervillain organization. In “Secret Empire,” thanks to a magical artifact and a changed timeline, Steve Rogers was raised by Hydra instead of being recruited by the US military during WWII for the super soldier project that turned him into Captain America.

The company also launched a similar event on television in April, with “Agents of Hydra,” a limited arc on the ABC show “Agents of S.H.I.E.L.D” in which Hydra has, you guessed it, taken control of everything. Here, the new reality is a Matrix-like simulation in which the show’s main characters are imprisoned. But aside from that, and the fact that Captain America doesn’t appear (ABC likely can’t afford Chris Evans, who plays the first Avenger), the premises are largely the same.

And yet, “Agents of S.H.I.E.L.D.” hasn’t spawned a digital mountain of outrage. Nor should it — and it comes down to how it tackles the dicey subject matter.

The gist: in both “Secret Empire” and “Agents of Hydra,” the Nazi-offshoot Hydra has established a totalitarian society and is rounding up super-powered beings, who are then sent to concentration camps. It’s a typical Nazi story, but unfortunately, there is some rather disturbing real world context.

* A perceived spike in anti-Semitic activity reported since November.

* Multiple attempts to restrict people of Muslim descent from entering the country.

* Not to mention Donald Trump’s well-documented hostility to an open press.

In other words, there is considerable anxiety about the current political climate.

“Secret Empire” has been in the works for at least a year, but it all but ignores that real world context, minus acknowledging that Nazis tend to like concentration camps. If anything, it treats the subject matter like window dressing, background for a plot intended to blow readers’ minds.

“Agents of S.H.I.E.L.D,” however, embraces that real world context. It does everything it can to ensure that the real world still matters and that the audience understands the negative consequences of a Nazi-driven society. And unlike (so far) the comic book counterpart, it doesn’t shy away from the fact that Hydra is definitely rooted in the Third Reich.

One exchange in the arc’s first episode sums it up. The character Simmons, arriving in from the real world, confronts a student in the simulation who asks her if Hydra were Nazis.

“Every last one of them,” she says. “And don’t you let anyone forget it.”

When the ABC show you don't care about is throwing shade at you @Marvel pic.twitter.com/XNrOZ2nbcO

I was struck by the response to this innocuous tweet. In particular, people seemed shocked that Marvel would be so blunt about Hydra. Fans of the show knew better, pointing to other moments in its history where characters acknowledged Hydra’s connection with Nazism.

@velocciraptor @dancingofpens @Marvel Same show that has been refusing Marvel's normalization of Nazis since 2014: pic.twitter.com/Mja8TMBFwR

“Agents of Hydra’ isn’t perfect (it overly simplifies what can make a person turn into an actual Nazi), but what it does is remind the audience that there is history. Hydra didn’t come strictly from Nazis, (Season 3 revealed a much older, complicated history), but World War II was what propelled Hydra to supervillain status. 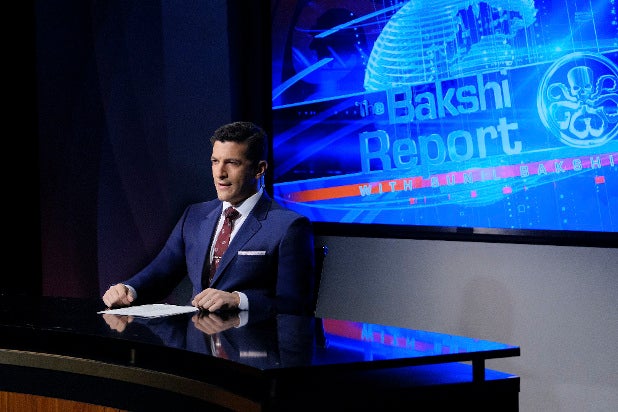 “Agents of S.H.I.E.L.D.” addresses the current political climate in both obvious and subtle ways. Even besides the actual narrative, numerous elements allude to what can be politely described as a post-Trump world. There are multiple lines of dialogue that sound eerily familiar, from “make society great again,” to “nevertheless, she persisted.” Without being forthright, “S.H.I.E.L.D.” drew the line between its story and current societal fears.

Marvel Comics had a wonderful opportunity to make the connection to real world anxieties explicit, but in “Secret Empire,” it didn’t. The event just has one of Marvel’s greatest heroes become a Nazi, via magic, and lacking anything that expressly links it to what’s happening elsewhere, readers are essentially asked “trust us, it’ll pay off.” Fair or unfair, it feels like trying to have things both ways — something like “Nazis are bad, but we aren’t sure why.”

Nick Spencer, the lead writer on the comic, has resisted that criticism. Both him and Marvel editor-in-chief Axel Alonso told Entertainment Weekly that little in “Secret Empire” has to do with current politics.

In an interview with The Daily Beast, Spencer said that he expected a loud reaction to the twist, but he chalked it up to fan’s reactions to change, not the actual criticisms surrounding it. He seems to be embracing the anger, which I guess is a fine thing when you get so much of it.

“I’m the most hated man in America today and Donald Trump is running for president!” he exclaimed (before Trump won, obviously).

Marvel Comics has started to understand it has a PR problem, and on Tuesday, the company published a statement defending the Captain America plot twist, hoping that readers make it to the end and don’t judge it based on one issue.

“What you will see at the end of this journey is that his heart and soul — his core values, not his muscle or his shield — are what save the day against Hydra and will further prove that our heroes will always stand against oppression and show that good will always triumph over evil,” the statement, provided to TheWrap, said.

But the issue isn’t just what the story entails, it’s how you address it. Immediacy matters. “Agents of S.H.I.E.L.D.” manages to create a world where Hydra is the establishment, but every other plot point is about questioning it explicitly. It takes note of the intertextuality of the larger Marvel universe and the current political climate, instead of ignoring it.

There’s also one of the biggest points of contention raised by fans: turning Captain America into one of the top members of Hydra throws away decades of history, both in comics continuity and in reality. Not only was the hero created by two Jewish men (cartoonists Joe Simon and Jack Kirby), but he was created specifically to fight Nazis.

The comic storyline may end up paying off in the end, but it was a mistake not to acknowledge how messed up the current situation is for a lot of people in the actual ongoing text.

One of the Marvel franchise’s most iconic covers — the first one in fact — is from 1941 and shows him punching Hitler. It’s an image that has been adapted quite a bit in the past year, especially after white supremacist Richard Spencer, who refuses to call himself a Nazi but has borrowed heavily from Nazi propaganda and iconography in his political activities, was punched in the face at a rally.

And after all, what’s more inspiring than seeing an actual symbol of America not taking crap from Nazis?

Wherever the comic series takes Captain America, it shouldn’t have lost sight of that. Fortunately, “Agents of S.H.I.E.L.D.” didn’t.