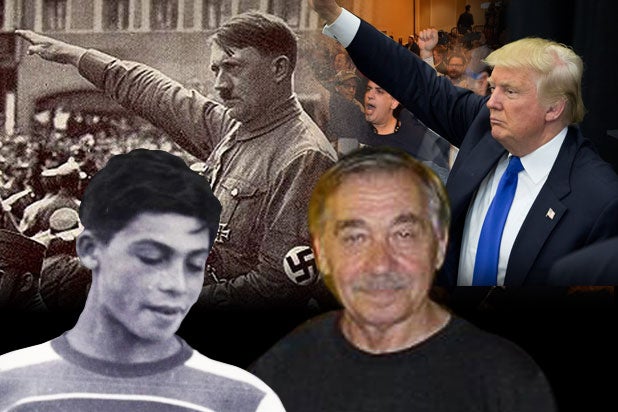 One of the questions I never thought I’d ask my father: Does Donald Trump truly resemble Adolf Hitler?

My dad, Zeev Hod, is not only one of the smartest people I know — he’s also had the unique experience of being both a Holocaust survivor and a history teacher who spent years educating high school students about the Third Reich.

Given that people from Louis C.K. to Bill Maher to Glenn Beck have compared Trump to Hitler, I wanted to know if my dad also believed there were similarities between Trump and the man who killed an estimated 200 members of our family —  including my father’s father.

Was he worried? Did it bring back any memories? Did he think that Trump was in fact borrowing ideas from “Mein Kampf?”

The short answer is “yes.”

“One of the things people used to say about Hitler when he rose to power in the early 1930’s was that he was saying it like it is,” my dad told me over the phone from Tel Aviv. “They thought he was a bit of a clown, with his big speeches and over-the-top showmanship, but they also admired his ability to say what everyone thought, but didn’t dare say out loud.”

“Are you worried?” I asked.

“Not yet,” he answered. “But there is definitely room for concern.”

I should say, my dad is not easily scared. When he was just 4, his dad — my grandfather — was taken away to one of Hitler’s labor camps, never to be seen again. He was killed at the age of 33.

The mass murder of Jews in Hungary, where my father was born, began towards the end of World War II, after the Nazi invasion in March 1944. At the time, close to 800,000 Jews were still living in Hungary. Most of them would perish.

The family story goes that on the day my grandmother and her two small children were eventually rounded up for deportation and certain death, she was saved by a soldier who took pity on her (my grandmother, I’m told, was strikingly beautiful), and shoved her and her small children behind a door. She managed to escape with the kids to a forest near a small village where for nine months, including the dead of winter, they all hid in a hole in the ground.

My dad later immigrated to Israel, where he served in the Israel Defense Forces’ most prestigious commando unit and fought in four wars.

But despite all of his hardships, he’s managed to keep a sunny disposition and an optimism that, at times, astounds me. He became a teacher of Jewish history so that his students, and the world, would never forget.

Here is our conversation, translated from Hebrew.

So, how much does Donald Trump truly resemble Adolf Hitler?
There are slight similarities between the two. But there is a difference. Germany was in much worse shape economically in the ’20s and ’30s. It was still recovering from WWI, having to pay reparations to the Allies. Hitler was able to tap into the Germans’ frustration by zeroing in on an enemy, the Jews. He claimed the Jews were taking over the country, stealing high-paying jobs. He was able to galvanize the uneducated by saying that Jews had stabbed Germany in the back.

Can you give me more examples?
Sure. Now that America’s minority population is becoming a majority, Trump is able to tap into that same fear among its disenfranchised. Asking his supporters to raise their hand during his rallies while proclaiming their allegiance to him is eerily reminiscent of Hitler’s Nazi salute, which was meant to inspire loyalty and sympathy towards the regime.

Did Hitler have a lot of fights and scuffles at his rallies?
Absolutely. If anyone dared to heckle Hitler, the S.A. would beat them to a pulp. They were essentially thugs. Not that different from those we see at Trump’s rallies today.

What do you think of the fact that so many white supremacists support Trump? Is it because he reminds them of Hitler?
They seem to think he’s some kind of savior. He’s anti-Muslim and anti-Mexican. He’s also pro-white, at least from their point of view. They see him as an ally.

What do you make of the fact that Trump’s ex-wife, Ivana, said he used to read “Mein Kampf” before going to bed?
Well, that doesn’t necessarily make someone a Hitler sympathizer. I’ve read it too, as a history teacher. But it is possible that some of Hitler’s ideas have, consciously or subconsciously, seeped into his way of thinking.

So how worried are you really?
Let me put it this way, it could deteriorate and get really ugly. But it’s still an “if.”