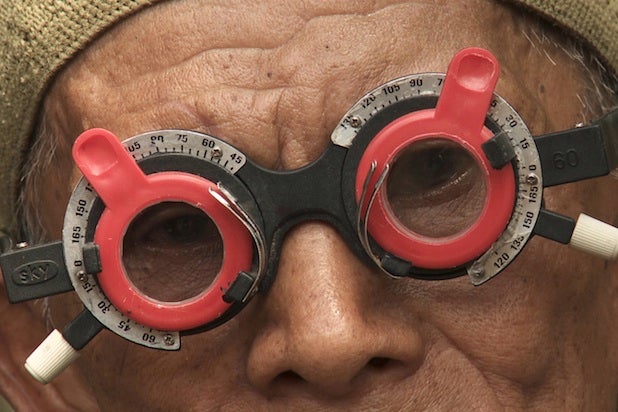 "The Look of Silence"

“Amy,” “The Black Panthers: Vanguard of the Revolution,” “Listen to Me Marlon,” “The Look of Silence,” “The Russian Woodpecker” and “What Happened, Miss Simone?” have been named the best documentaries of 2015 by the International Documentary Association, which has nominated those six films in the top category at the IDA Documentary Awards.

The competition will pit three docs about show-business personalities–Amy Winehouse in “Amy,” Marlon Brando in “Listen to Me Marlon” and Nina Simone in “What Happened, Miss Simone?”–against a trio of films that deal with the civil rights movement (“The Black Panthers”), the aftermath of the Chernobyl nuclear disaster (“The Russian Woodpecker”) and the Indonesian genocide of the 1960s (“The Look of Silence,” a companion piece to Joshua Oppenheimer‘s Oscar-nominated “The Act of Killing”).

The nominations were made by an IDA jury after screening panels narrowed the field from more than 200 to to 25.

Also Read: 'Look of Silence' Director Talks of Genocide and Guilt: 'Impunity Is the Story of Our Times'

Among the high-profile non-fiction films not nominated are “The Hunting Ground,” “Cartel Land,” “The Wolfpack,” “Meet the Patels,” “Kurt Cobain: Montage of Heck,” “Steve Jobs: The Man in the Machine,” “Going Clear: Scientology and the Prison of Belief,” “(T)ERROR” and Michael Moore‘s “Where To Invade Next.”

Several of those films were recognized in other areas, though. In the Creative Recognition categories, in which the IDA announces winners rather than nominees, “Montage of Heck” won for its editing and “Best of Enemies” for its music.”(T)ERROR” and “Best of Enemies” were nominated for the ABC News VideoSource Award, while “Cartel Land” director Matthew Heineman won the Courage Under Fire Award.

Other Creative Recognition winners include “The Russian Woodpecker” for cinematography and “Listen to Me Marlon” for writing.

Honorary award winners include Netflix’s Ted Sarandos, who will receive the Pioneer Award.

Last year, three of the five IDA nominees went on to receive Oscar nominations in the feature-documentary category, including “Citizenfour,” which won both awards. Typically, two or three of the films singled out by the IDA are also nominated by Oscar voters.

The IDA Awards are one of the two top honors in the documentary world. The New York-based Cinema Eye Honors will announce its nominees next week.

The IDA Awards will take place on Saturday, Dec. 5 on the Paramount Pictures lot. Comedian Tig Notaro will host.

Top pics from inside the bashes as fall festivals and premieres bring out awards contenders, pretenders and hopefuls for the Oscars on February 28, 2016