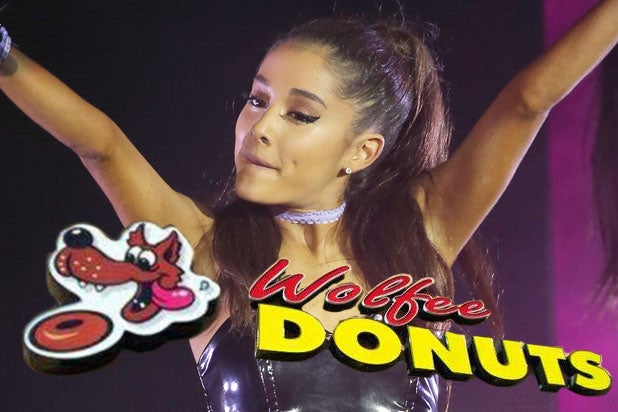 The Lake Elsinore, California, donut shop where singer Ariana Grande now-infamously licked a donut and spouted anti-American rhetoric had its grade knocked down from an A to a B on Wednesday by the Riverside County Department of Environmental Health.

On the plus side, business is booming.

Joe Marin, owner of Wolfee, told TheWrap that business has “tripled” at his shop since video of the donut-licking incident was made public, with customers flocking to the store in a show of support.

Still, Marin said he was “furious” and “pissed off” at Grande’s behavior — and he’s angry about both her treatment of his donuts and her America-bashing comments.

“She forgot that America buys your tickets, that’s why you’re famous,” Marin, an immigrant from Mexico who has obtained American citizenship, said.

According to Marin, he initially watched the video out of curiosity, when employees told him that a celebrity had been in his store.

When he watched the video and saw the behavior of Grande, 22, and her companion, Marin said, “I was like, ‘Whoa,’ you know?”

Marin said that the incident took place Saturday night at approximately 11:30, and that the licking occurred out of a dare.

In addition to licking a donut, Marin said, Grande spat on his wares.

“She licked the ones with the frosting; she was spitting on the white powder” donuts, Marin said.

Marin provided the video to TMZ to show Grande’s true colors. He’s also provided a copy to the sheriff’s department, so that they can evaluate whether to pursue charges.

“A customer out there could have got sick,” Marin said.

But Marin has already been sickened by Grande’s behavior. According to the donut shop owner, Grande has not reached out to apologize — and he’s not buying the statement she released, in which she declared that she’s “EXTREMELY proud to be an American” and said that she had dropped out of Saturday’s MLB All-Star Concert in Cincinnati due to recent “emergency oral surgery.”

“She’s saying the statement because she basically got caught,” Marin said.

As for the downgrade from the health department, Marin admitted that, in addition to being dinged for leaving donuts out within licking distance of customers, the inspector also pointed out “minor repairs” that need to be made, including improper egg storage and a faulty dishwasher. Marin insists that a number of those repairs are already underway, and he expects that his donut shop will have its A rating restored by the July 15 deadline.

Whether Grande’s reputation will be restored as promptly is another matter.