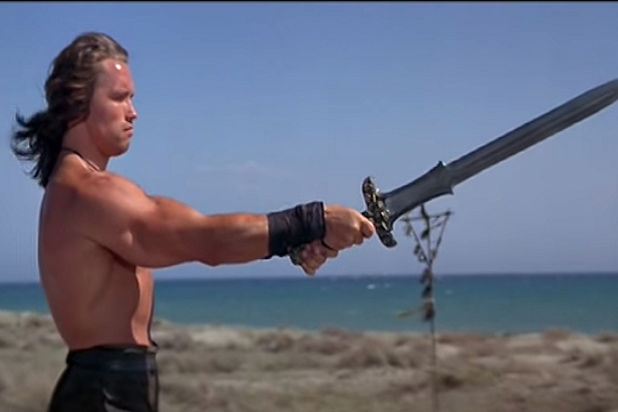 “Legend of Conan,” the follow-up to early Arnold Schwarzenegger vehicle “Conan the Barbarian,” will bring back “at least three” characters from the original film, writer and producer Chris Morgan has revealed.

While Schwarzenegger is already confirmed for the film, there is no word yet on who the other returning characters might be. Perhaps it will be Subotai, Conan’s archer companion from the original film played by Gerry Lopez, or even Thulsa Doom, the evil sorcerer played by James Earl Jones.

Morgan also said the film will take us into Conan’s life 30 years after the events of the original. “Our tone is a logical extension of the character established in the ’82 film…but 30 years later,” he said in an interview with a Schwarzenegger fan site.

“When we meet him again, Conan has been many things over the course of his life — a thief, a warrior, a pirate, a king, a legend — and is now an older man,” Morgan continued. “Think ‘Unforgiven’…with a sword-wielding barbarian.”

“Conan the Barbarian” was released in 1982 and helped launch Schwarzenegger as one of the biggest action stars on the planet. The film was based on the pulp novels by Robert E. Howard. John Milius directed and co-wrote the screenplay with Oliver Stone. Dino De Laurentis served as executive producer.

“Legend of Conan” is currently set up at Universal Pictures, with Morgan and Fredrik Malmberg producing. It does not have an official release date.