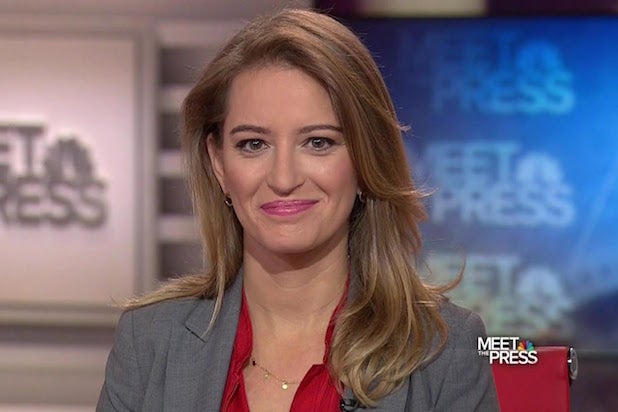 Donald Trump called out NBC News reporter Katy Tur not once but four times at a Florida rally on Wednesday, inspiring her supporters to take up the hashtag #ImWithTur.

The play on the pro-Hillary Clinton #ImWithHer hashtag brought with it accusations that Trump had endangered Tur — who has covered his campaign since last year — by putting the focus on her at a rally full of riled-up supporters.

Trump was talking about his other Florida rallies scheduled for Wednesday, insisting that reporters were ignoring “something happening” around his campaign.

Trump has been accused many times before of trying to hype up his crowds by picking on reporters in the press pen. He has also talked about loosening libel laws in the United States to make it easier to sue reporters and news outlets.

Trump’s focus on Tur led some on Twitter to accuse him of both sexism and picking on journalists.

We don't need an insecure president who bullies and endangers reporters. #ImwithTur pic.twitter.com/5DdmPOfpPG

New York Times reporter Nick Confessore offered his support with the message: “#FF my friend @KatyTurNBC, a talented and tough reporter who doesn’t get cowed. #imwithTur.”

But some Trump supporters accused reporters of bias against their candidate.

“PSA: Members of the media working with politicians to mask corruption are not journalists and should be treated as traitors #ImWithTur,” wrote @JaredWyand, a self-described “Nationalist” who didn’t actually sound like he was with Tur.

With the election days away, there’s some promising news for Donald Trump supporters

Hillary Clinton is still the favorite to win the 2016 presidential election. But Democrats may find the following five pieces of news ominous -- and they may provide hope to Trump supporters. We're only using reputable, mainstream outlets here, so get ready to worry or rejoice, depending on your leanings.