Yes, it’s been a miserable year on a lot of fronts. And this is a mess of an awards season – a morass of delays, rule changes to adjust to the fact that movie aren’t being released and theaters can’t open, and the promise that it’s going to go on and on for another five months, until the April 25 Oscars will put this season out of its misery and we’ll all realize that we should immediately start thinking about the Emmys.

So no, the word thankful does not immediately come to mind when I think of 2020, or of this awards season.

But in the midst of the pandemic and the nonexistent release schedule, and in the shadow of the endless stretch of campaigning that lies ahead, there are a few reasons to be grateful on this oddest of all Thanksgivings.

1. Film festivals
They’ve tried, they really have. As events whose heart lies in bringing audiences together to celebrate the art of filmmaking in a communal setting, festivals have been robbed of one of the main reasons they exist. But one at a time, they’ve worked to find ways to promote cinema without their usual tool kits. They’ve done drive-in screenings, they’ve gone virtual to have “premieres” that take place only online, and at times they’ve simply released lists of the movies they would have shown if they could have; what comes through is a love for film and a desire to promote it in any way possible.

I didn’t “go” to the Toronto International Film Festival, because there were no press screenings or events I could have attended if I were there. But I saw 30 TIFF movies, which was more than I could have gotten to if I’d been running between the auditoriums at TIFF Bell Lightbox and the Scotiabank and Roy Thomson Hall. Sure, I would rather have been there running ragged on no sleep, but worthy movies don’t go away just because there’s no place to show them. And film festivals, working within the restrictions of these trying times, have found a reason to go on.

2. Netflix
Yeah, the streaming giant is going to be the death of the movie business, yadda yadda. But when a year when we all have to stay home, isn’t it nice to be able to sit on the couch and watch good new movies by Spike Lee, David Fincher, Charlie Kaufman and Aaron Sorkin, among others? Or to have a place where you could get obsessed with chess or mad at people who have private zoos?

Let’s face it, Netflix is the right evil empire at the right time. And when they dominate the Oscars, as they probably will, the people who don’t want them to be competing there ought to thank them for making the race a lot more robust, healthy and interesting than it would have been without them. 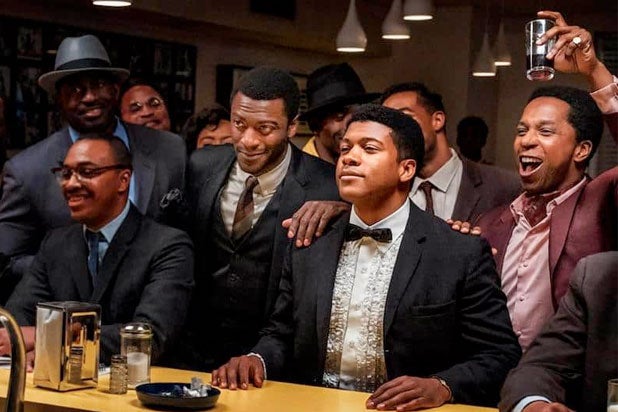 3. Netflix’s rivals
Of course, Netflix has had some help from its streaming counterparts. Amazon has a strong slate headed by Regina King’s “One Night in Miami,” and Apple nudged its way in with Sofia Coppola’s “On the Rocks,” which if nothing else gives Bill Murray a grand showcase. New Oscar rules have made it easier for movies to qualify even if they’re made by and for streaming services, and everybody wants a piece of that.

4. Unobtrusive watermarking
Here’s the problem when you can’t go to screenings and you have to watch upcoming movies at home on a link: Those movies almost always have a visible onscreen anti-piracy watermark, which more often than not takes the form of your name or email address somewhere on the screen. The degree to which this is annoying differs from studio to studio and from screening platform to screening platform. More often than not, it starts out very annoying, then you get used to it, then it gets annoying again when your damn name gets in the way of something important.

Watching a subtitled movie with your name at the bottom of the screen can be particularly annoying, though the worst by far was watching the beautifully shot, impeccably composed “Nomadland” with my name in BIG LETTERS right across the middle of the screen. But I’ve since gotten a better “Nomadland” link without that distraction — and besides, I’m here to be thankful, not to complain. So here’s a thank you to the platforms that keep their watermarking unobtrusive, making it small or tucking it in the corner. 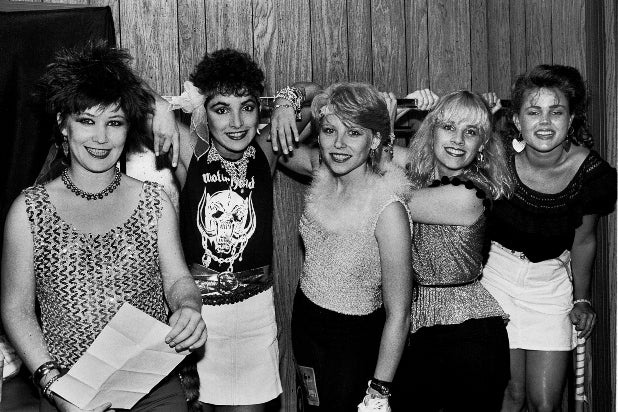 5. Nonfiction filmmaking
All year long, nonfiction films told us about the vital issues of this stormy year, from voter suppression (“All In: The Fight for Democracy”) to civil liberties (“The Fight”), from COVID-19 (“76 Days,” “Totally Under Control”) to international tensions (“The Dissident”), from race (“Time,” “MLK/FBI”) to sexual abuse (“On the Record,” “Showbiz Kids”) to LGBTQ issues (“Welcome to Chechnya,” “Disclosure”).

There were plenty of films to entertain us, too: I’m partial to “The Go-Go’s” myself, since I was part of that story back in my rock ‘n’ roll days, but you might go for Taylor Swift (“Miss Americana”) or for the playful subversion of Kirsten Johnson’s “Dick Johnson Is Dead.” We don’t even have to wait for the inevitable films about the pandemic or the 2020 election: More than ever, documentaries have felt like a true and essential real-time chronicle of our complex and stormy times.

6. Indie gems just waiting to be watched
Hope springs eternal this year — the hope that without so many studio films hogging the spotlight, and with no star-studded receptions happening to tempt voters, movies that might have been overlooked in the past could break through. It’s probably wishful thinking, for the most part — but as of Thanksgiving morning, the Academy Screening Room for the Best Picture category has more than 100 films just waiting for members to watch them. And while some of those are presumed front runners, most of them are not, and many are little indies that could greatly benefit from the voters’ eyeballs that now have access to them.

(Granted, you don’t get your movie into that screening room unless you pay the Academy $12,500, so it’s not a completely open playing field.)

How about it, Academy members? Why not check out some movies this long holiday weekend? You don’t need my advice, but if you want it, here’s a list you could work from: “Wendy,” “The Outpost,” “First Cow,” “Never Rarely Sometimes Always,” “Herself,” “Shirley,” “The Trip to Greece,” “The True History of the Kelly Gang,” “Wander Darkly.” You’ll find something in there that you like.

Also Read: Oscars May Look to 2020's Indie Films - But How Indie Can They Really Get? 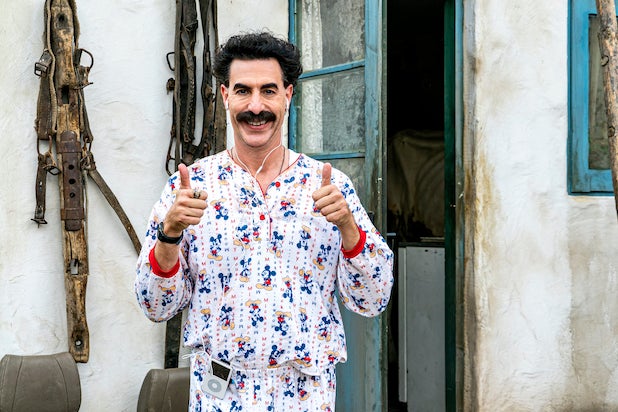 7. Comedies that came along at the right time
When the situation outside is dire and you can’t take another shot of cable news, you don’t always want to watch another dark drama. That’s why “Borat Subsequent Moviefilm” probably felt more refreshing and necessary than it would have under different circumstances, and also why comedies like “Bill & Ted Face the Music” and “Palm Springs” seemed like movies we needed to see when they came out.

They might not all be awards movies, but they felt good at a time when we needed to feel good. I mean, hey, even “Eurovision Song Contest: The Story of Fire Saga” had its moments.

8. Theaters
First, I’m thankful that they all haven’t declared bankruptcy and that there’s a pretty good chance that someday we might actually get back to seeing movies in big rooms designed for that purpose.

But I’m also thankful for the moments when I’ve been able to get out of the house and see films with real projection and sound, whether it’s a couple of screenings where my wife and I were the only people in the biggest theater at Netflix, or one or two other very sanitized, very socially distanced screenings.

Some movies — most movies, I’d argue — really do belong in big rooms, which is why I’m happy that I’ve been able to revisit that experience a handful of times. One was even a public screening, when I drove to Simi Valley (which isn’t in L.A. County and thus wasn’t under the same restrictions) because I felt as if I needed to see Christopher Nolan’s “Tenet.” When I bought my ticket in mid-afternoon, the online seating chart said I was going to be the only person in the theater; by the time the film began in the early evening, there were about 20 people in the 100-seat theater. I wish there were fewer, and I wish the theater wasn’t serving food, but I’m glad I got to see it before streaming became an option. 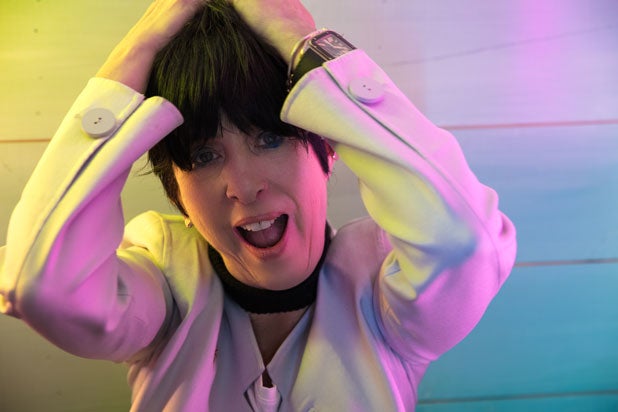 Face it: She’s not going away, people. You’re gonna have to give her an Oscar someday.

10. Other winners
The early days of awards season happened to coincide with a different kind of awards, as the extended basketball season and the truncated baseball season both came to an end within a couple of weeks in October. And when that happened, the two teams I root for, the Lakers and (especially!) the Dodgers, won championships.

I understand this doesn’t have anything to do with movie awards, although the late Lakers star Kobe Bryant did win an Oscar a few years back, and I recognize that many of you may not be fans of those teams or may not care about who wins the World Series or the NBA Championship. I respect your right to feel that way, and I hope you respect my right to be happy about the Lakers and delirious about the Dodgers.

I mean, if you had told me one year ago that over the next 12 months, the Dodgers and Lakers would win championships, “Parasite” would win the Oscar for Best Picture and Donald Trump would lose the election, I would have said, “Thanks! Wow, 2020 is going to be a great year!”

Turns out it hasn’t been such a great year after all. But it does have a few things to be thankful for.