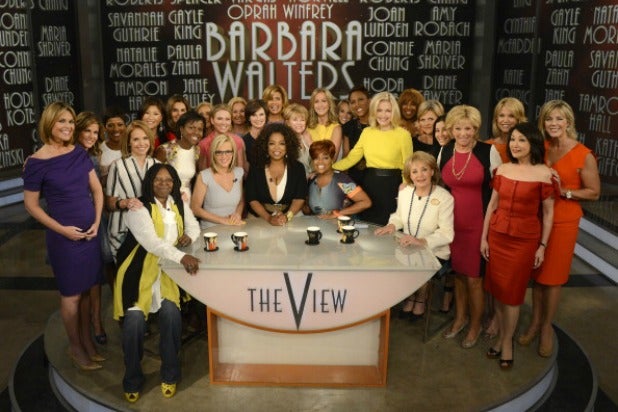 Barbara Walters is all done with “The View.” While her farewell episode won’t air until Friday, the broadcast legend taped it on Thursday in the afternoon, and it was a star-studded affair. To make things even more fun, many of the guests were surprises for Walters, like former First Lady and Secretary of State, Hillary Clinton.

Ever the journalist, Walters couldn’t resist asking Clinton if she was running for president in 2016. When she didn’t get a straight answer, she suggested that maybe Clinton should take over her seat. Then, no one would ask her what her future plans are.

The lone actual guest on the show was Walters’ long-time friend Michael Douglas. They did some usual “View”-like banter, but his appearance was completely overshadowed by the rest of the people who made appearances.

Walters was treated to a visit from Oprah Winfrey, who said she owed much of her career to Walters. “I want to thank you for being a pioneer, and everything that that word means,” Winfrey told her. “Being the first … to break down the barriers, to pave the road that we all walk on.”

What followed next was incredibly touching for Walters. Winfrey brought on a whole crowd of female news anchors who’d been inspired by Walters. The women all formed a massive semi-circle around Walters, creating one of the most stirring visuals of her powerful influence.

See video: Barbara Walters and David Letterman Aren’t Ready to Retire After All

Feeling the power of the moment, Walters said of the women, “These are my legacy.”

Another piece of Walters’ legacy are the myriad impressions of her. None more famous, perhaps, than Cheri Oteri‘s take on Walters for “Saturday Night Live.” And so, in a pre-taped bit, Oteri suited up as Barbara Walters so the legendary newswoman could interview herself. The bit proved a huge success, with Walters and the other panelists cracking up as it played.

At one point, the real Walters asked Oteri’s Walters if she had any regrets about creating “The View.” Oteri’s Walters responded, “Little did I know that I would be surrounded by four cackling hens, all speaking over each other where I couldn’t get a word in edgewise.”

Trying to keep it light, Walters quipped that she was going to by the Los Angeles Clippers, and teased her next step, saying, “Starting soon I will be available for supermarket openings and charity auctions. For a $10 bid, you can have lunch with me. For a $20 bid, you don’t have to.”

In the end, she got serious to say not farewell, but “à bientôt,” which means “see you later” in French. “Now having this amazing career, how can I just walk away and say goodbye?,” Walters said. “From the bottom of my heart to all of you with whom I have worked and watched and been by my side thank you.”

She gave one last plug to her two-hour special airing Friday night on ABC, and delivered a personalized farewell version of the show’s sign-off: “When all of that is done, I can take some time and enjoy my view.”