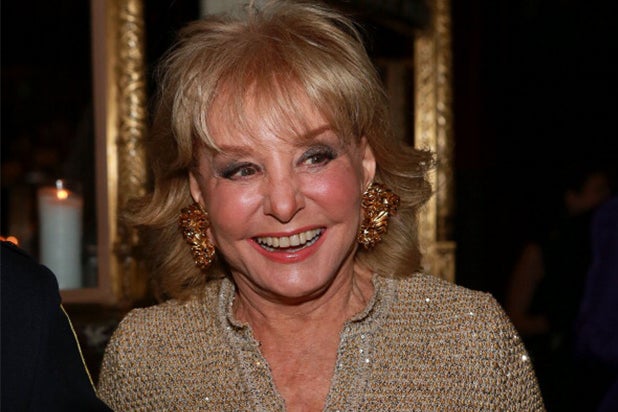 Don’t expect Barbara Walters to fade away after she retires: The news legend said at a party for her retirement from journalism that she isn’t ready to say goodbye for good.

“Who knows what the future brings?” Walters asked in her not-necessarily-farewell speech. “Maybe instead of goodbye I should say à bientôt — which in French means ‘see you later.'”

Also read: Woody Allen: ‘Journalists Have Always Been Heroes to Me’

Walters said her à bientôts at an ABC News party celebrating her six decades in journalism, which included serving as the first woman to anchor a nightly news broadcast. She said, with plenty of modesty, that her first night on the air was a mess. But she added that if she paved the way for other women, she was grateful.

Walters noted that she had interviewed every president and first lady from Richard and Pat Nixon to Barack and Michelle Obama. But that was only scratching the surface of her career.

The party, at the Four Seasons restaurant, found celebrities from Woody Allen to Joan Rivers to Michael Douglass milling with news luminaries like Ben Sherwood, the ABC News president who is taking over next year for Anne Sweeney as co-chair of Disney Media and President of the Disney-ABC Television Group. Walters’ “View” co-hosts and the anchors of “Good Morning America” were also among those who turned out to honor her.

They milled beneath indoor cherry blossoms, surrounding a candle-strewn reflecting pool. The gold and pink coloring evoked the glamor of Manhattan in the 1970s, when “Saturday Night Live” was already immortalizing Walters with Gila Radner’s Baba Wawa character.

That was also the decade when Walters first met Disney CEO Bob Iger, who was then a page. He was sent to deliver her something, and she asked him his name. A long friendship was born.

At least, for now.