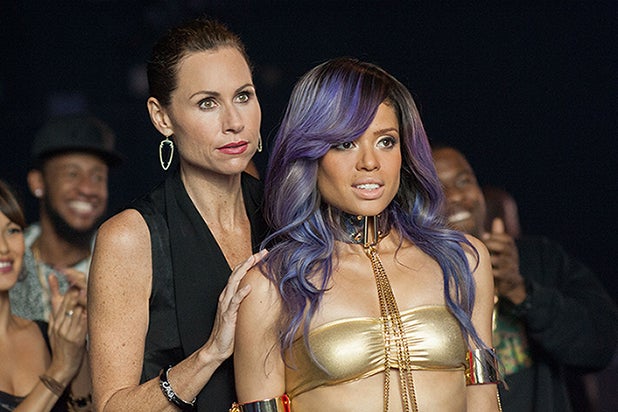 When Viola Davis appeared at the 2012 Academy Awards without her usual wig and wearing her natural hairstyle, it was a gesture toward personal and emotional authenticity. This gesture can be felt as the animating impulse behind writer-director Gina Prince-Bythewood’s “Beyond the Lights,” a Relativity release (which recently premiered at the 2014 Urbanworld Film Festival) that begins with a shot of a young girl’s curly hair.

Working-class single mother Macy (Minnie Driver) is determined to see her daughter, Noni, win a talent contest, but she needs the help of a kindly hairdresser to get her daughter’s unruly curls in line. Young Noni sings Nina Simone’s “Blackbird” with all her heart, but the first prize goes to a tap-dancing and smiling little white girl while Noni gets first runner-up. Macy stiffens with anger at the unfairness of the decision as she drags her daughter off the stage and orders her to throw away the second-best trophy out in the parking lot. She wants her daughter to be a winner, the best of all, and nothing will stop her from reaching that goal.

After this parking lot scene, the film disorientingly cuts to a salacious pop video where we see a girl wearing a mauve weave and throwing her barely-clad body around in an aggressively sexual fashion in the company of rapper Kid Culprit (Machine Gun Kelly) to a song called “Masterpiece.” This girl, it turns out, is the grown-up Noni (), who is about to break out with a solo album selling herself as a piece of sexual pop fantasy.

Noni walks around with her handlers and her controlling mother with a disconnected, discontented look, so it comes as no surprise when she sits on a railing of her hotel room and wavers for a moment, wondering whether she should jump. Luckily, a hunky, flawlessly upright and nurturing cop with political ambitions named Kaz (Nate Parker) is right there to talk her off the ledge, to pull her up when she falls and to tell her he “sees” her.

The rest of “Beyond the Lights” tells the story of the romance between Noni and Kaz, all laid out in careful, point-by-point detail. Describing the story of this movie makes it sound like it could very easily be corny and even campy, but Prince-Bythewood and her cast takes all of it so seriously and with such honest emotion that there is no plot point when a sense of plausibility falters, or when a big moment devolves into silliness, even a confrontation between Noni and her mother where Macy delivers a slap to her daughter’s face. If this were a different kind of enjoyably bad movie, that slap might have been met with laughter and hoots, but Prince-Bythewood keeps her camera on Noni’s anguished face after the slap, in extreme close-up, so that we don’t laugh at it.

In every scene here, Prince-Bythewood calmly and sensitively melts our resistance to the outlandish, outsized quality of her plot and stays true to the message she wants to deliver without ever getting pious or preachy. The central relationship between Noni and Kai could use tightening, particularly in a love scene down in Mexico that feels a bit unnecessary, but their Mexican trip also contains the movie’s best scene, where Kai charmingly tries to sing some karaoke for her and then she gets up and sings “Blackbird” a cappella. Mbatha-Raw sings the song with intense and sometimes touchingly oblique emotion, and Prince-Bythewood smartly captures a variety of reactions in the audience at the karaoke bar after the song is finished: some touched, yes, but some stunned and uncertain, too. It’s in a detail like that that Prince-Bythewood shows her commitment to the likely truth of a given situation, and it is this commitment that lets her get away with making her message movie on show business integrity.

Also read: ‘Belle’ Director Amma Asante on How the Indie Drama Turned Her Into a Hollywood Player

Never is this commitment better displayed than in the way she handles Driver’s mother, who could easily be a hissable villain but winds up being a three-dimensional person with a variety of feelings and reactions. “Beyond the Lights” advises us to throw away our weaves and put on some Nina Simone records, and that’s a message we should all get behind.