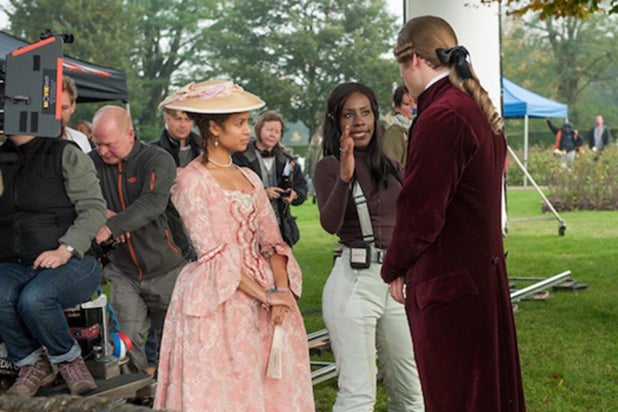 If you asked most people in Hollywood who Amma Asante was just a few months ago, you’d probably get a blank stare. Now, after the release of her critically acclaimed film “Belle,” the British writer-director is a certified Hollywood player.

Asante’s life and career took a dramatic turn in May, when “Belle” hit theaters in North America. TheWrap spoke with her this past weekend in Boston at the National Association of Black Journalists (NABJ) Convention, where Asante introduced clips of the film during a presentation by Fox Home Entertainment.

It seems Asante had no reason to worry.  received an impressive 83 percent positive rating on review aggregation site Rotten Tomatoes and the independent film earned a respectable $10 million at the box office via Fox Searchlight.

The movie is based on the true story of Dido Elizabeth Belle (Gugu Mbatha-Raw) — the illegitimate, mixed-race daughter of Royal Navy Captain, Sir John Lindsay (Matthew Goode). Lindsay leaves Belle to be raised by her aristocratic great uncle, Lord Mansfield, in 18th century England. Mansfield (Tom Wilkinson) and his wife (Emily Watson) are already taking care of another niece, and the two girls become inseparable. But while Belle’s lineage allows her certain privileges, her skin color prevents her from having the traditional noble social status.

“Initially this project had started off with my producer and the writer who’s credited on the film, with HBO in America. Then HBO dropped the project,” Asante said. After the script passed through several different hands, Asante decided to give it a more personal touch.

“What I did was, I put my experiences into Dido’s life. That was the easiest way of connecting the historical facts and to try and make it personal … There are many lines in it that are quotes from my father and quotes from my sister,” Asante said, referring to the fact that she grew up in England, but felt like an outsider because she is black and of Ghanaian descent.

“We lived in an area where we were one of only two black families on the street,” Asante explained as she opened up about her personal experiences with racism. “We went through that period of having feces through the letterbox (mailbox) … and graffiti on our walls.”

It seems drawing on her personal experiences was exactly what the project needed. “It’s resonated and not just with women, but with men as well. Not just with people of color, but with people from all backgrounds and they really are not just getting it, but really touched by it,” Asante said.

The film also brought Asante to the attention of some very influential people in Hollywood. “The offers are streaming in, to the extent that I cannot keep up with them, if I’m really honest. So that’s a really great place to be.”

In fact, Asante is currently developing her first studio film. “My next movie will be a Warner Bros. movie, which is great and fantastic,” Asante said, as she described her upcoming movie — the story of a first wife and a second wife who were both married to the same man at one point.

“It will be a double female lead, which I found so empowering and is wonderful for me,” she said, while remaining coy about who will play the leads. “All I can say to you is both women will be A-list females and Oscar has come into their worlds at some point. Both women are American.”

Asante is no stranger to the awards circuit herself. She took home the BAFTA Carl Foreman Award for the Most Promising Newcomer for her 2004 directorial debut, “A Way of Life.”

When asked if she was hoping to strike awards season gold here in the US with “Belle,” Asante shied away from the subject.  “The whole thing kind of scares me,” she said.