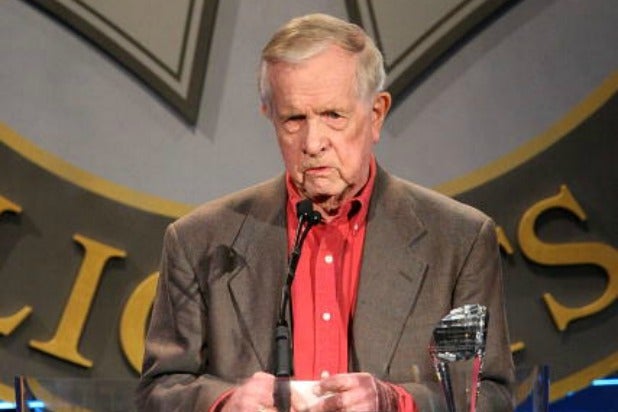 Bob Thomas, the Associated Press veteran who presided over generations of Hollywood reporters, covered a record 66 Oscar ceremonies, and broke the news of Robert F. Kennedy’s shooting, has died. He was 92.

Thomas interviewed Hollywood legends from James Dean to Marilyn Monroe, from Walt Disney to Bob Hope. His daughter, Janet Thomas, told the AP that he died of age-related illnesses Friday at his home Encino, Calif.

His visits to the Los Angeles AP offices in the mid-2000s were a delight to a generation of reporters covering stories like the Michael Jackson trial and Lindsay Lohan‘s troubles with the law. Quiet but dryly funny, he represented a link to an era when Hollywood’s glamour was more glamorous for its mystery, and secrets stayed secrets.

His career as an entertainment reporter started in 1944, when Bing Crosby was Hollywood’s top-grossing star, thanks to the year’s biggest hit, “Going My Way.” Thomas would go on to write hundreds of profiles, reviews, and obituaries — as well as three dozen books. Two of them, about Howard Hughes and Abbott and Costello, became television movies.

He also covered hard news: In 1968, he was the AP reporter who phoned in the bulletin when Sen. Robert F, Kennedy was shot at the Los Angeles’ Ambassador Hotel, soon after winning the California primary.

His AP obit, linked here and above, recount exploits that come from a distant era. He once brought a tape measure to an interview with Betty Grable to see if her figure had suffered from her recent pregnancy.

Grable agreed to be measured.

“Can you imagine doing that with Michelle Pfeiffer today?” he asked. “In those days, it really seemed like a playground.”