Brian Williams’ 11 p.m. ET show on MSNBC will come to an end on Thursday and he will depart NBCUniversal, a company he’s been with since 1993.

“The 11th Hour” premiered in September 2016 and capped off nightly news for MSNBC viewers through Donald Trump’s presidency and into the first year of Joe Biden’s.

Williams’ guests spent this week saying their goodbyes on-air. The New York Times’ Peter Baker told him he is an “icon” and a “role model.” Baker also tweeted, “Honored and more than a little sad to be making a final appearance tonight with the legendary @BWilliams in his next-to-last night hosting the @11thHour. Ending the day with him has been a singular treat these last few years. Television will no longer be the same after this week.” 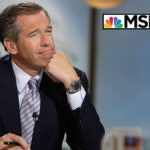 The longtime newsman announced his departure in November, saying in a statement, “Following much reflection, and after 28 years with the company, I have decided to leave NBC upon the completion of my current contract in December. I have been truly blessed. I have been allowed to spend almost half of my life with one company. NBC is a part of me and always will be. This is the end of a chapter and the beginning of another.  There are many things I want to do, and I’ll pop up again somewhere. For the next few months, I’ll be with my family, the people I love most and the people who enabled my career to happen. I will reflect on the kindness people have shown me, and I will pay it forward.”

“Brian’s time at NBC has been marked by breaking countless major stories, attracting leading journalists and guests to his programs, and most especially, great resiliency. He has built a fiercely loyal following for ‘The 11th Hour’ and we and our viewers will miss his penetrating questions and thoughtful commentary,” said MSNBC president Rashida Jones in a November statement.