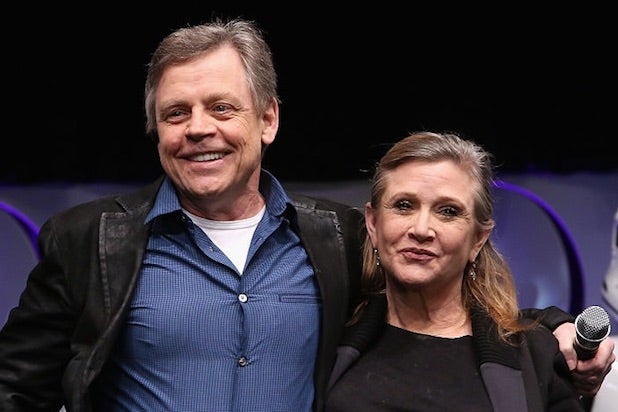 Carrie Fisher’s death Tuesday left a galaxy of her “Star Wars” compatriots without their princess, and they shared mournful tributes in her memory.

“No words,” Fisher’s co-star Mark Hamill wrote in a tweet, accompanied by a photo of them together in character. “Devastated.”

Harrison Ford, who played Han Solo in the sci-fi series, remembered Fisher as “funny and emotionally fearless” in a statement on Tuesday.

Also Read: Carrie Fisher Mourned by Hollywood: 'May the Force Be With You Always'

“Carrie was one-of-a-kind…brilliant, original. Funny and emotionally fearless,” he said. “She lived her life, bravely…My thoughts are with her daughter Billie, her Mother Debbie, her brother Todd, and her many friends. We will all miss her.”

“Star Wars: The Force Awakens” director J.J. Abrams shared his own tribute to Fisher, calling her “brilliant and beautiful, tough and wonderful, incisive and funny as you could imagine…”

Anthony Daniels, who played C-3PO in the “Star Wars” franchise, also mourned Fisher in a tweet, writing, “I thought I had got what I wanted under the tree. I didn’t. In spite of so many thoughts and prayers from so many. I am very, very sad.”

“The light in The Galaxy is dimmed by the loss of our Princess Leia. May The Force Be With Her!! RIP,” wrote Samuel L. Jackson, who played Mace Windu in the “Star Wars” prequels.

“Princess Leia, @carrieffisher now one with the Force. Your kindness & sharp wit will be missed. #RIP,” wrote Warwick Davis, who played brave Ewok Wicket in “Return of the Jedi” and recently returned to the series as Weeteef Cyubee in “Rogue One.”

The actress died on Tuesday morning after suffering a severe heart attack on a Los Angeles-bound flight from London on Friday.

Her daughter, “Scream Queens” star Billie Lourd, broke the news of her death in a statement on Tuesday. “She was loved by the world and she will be missed profoundly. Our entire family thanks you for your thoughts and prayers,” it read.

“Carrie Fisher was one-of-a-kind, a true character who shared her talent and her truth with us all with her trademark wit and irreverence,” said Disney Chairman and CEO Bob Iger in a statement.

“Millions fell in love with her as the indomitable Princess Leia; she will always have a special place in the hearts of Star Wars fans as well as all of us who were lucky enough to know her personally. She will be sorely missed, and we join millions of fans and friends around the world who mourn her loss today,” he added.

“Carrie holds such special place in the hearts of everyone at Lucasfilm it is difficult to think of a world without her,” said Lucasfilm President Kathleen Kennedy.

“She was Princess Leia to the world but a very special friend to all of us,” she said. “She had an indomitable spirit, incredible wit, and a loving heart. Carrie also defined the female hero of our age over a generation ago. Her groundbreaking role as Princess Leia served as an inspiration of power and confidence for young girls everywhere. We will miss her dearly,” added Kennedy.

I'm deeply saddened at the news of Carrie's passing. She was a dear friend, whom I greatly respected and admired. The force is dark today!

I thought I had got what I wanted under the tree. I didn't. In spite of so many thoughts and prayers from so many. I am very, very sad.

There are no words for this loss. Carrie was the brightest light in every room she entered. I will miss her dearly. pic.twitter.com/GgIeYGeMt9

Dearest Carrie, so incredibly sad to say farewell so soon to such a beautifully honest and unique human being- see you in the multiverse.

I'm heartbroken! Such a special person gone way too soon. I will forever miss #CarrieFisher. RIP

Princess Leia, @carrieffisher now one with the Force. Your kindness & sharp wit will be missed. #RIP PS: Thanks for the milk & cookies. xx pic.twitter.com/sFSy9UmvYY

The light in The Galaxy is dimmed by the loss of our Princess Leia. May The Force Be With Her!! RIP