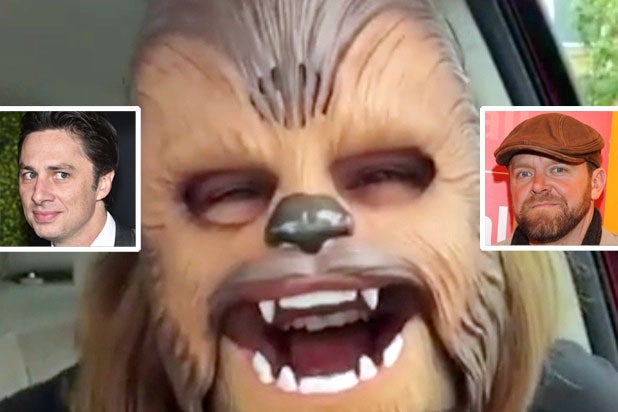 It was only a matter of time. Chewbacca Mom went viral again, but this time not everyone’s charmed.

“No. One. Cares. What. Chewbacca. Mom. Thinks,” said one Twitter user emphatically.

Candace Payne, best known for a Facebook livestream in which she tries on a toy “Star Wars” Chewbacca mask, began trending on social media Monday after she posted her version of Michael Jackson’s “Heal the World” in response to recent police shootings of black men and an attack on Dallas police.

While some praised her singing voice and positivity, others thought her antics represented a distraction from the real issues of violence in the U.S.

“Chewbacca mom is not the moral compass of this country,” said YouTuber Akilah Hughes. “She’s a woman who bought a mask and did stuff in it.”

Also Read: Chewbacca Mom Gets Her Own Hasbro Action Figure

“I think you can adequately pass or fail an entire society, based on nothing more than their collective interest in ‘Chewbacca Mom,'” said the “Smokin’ Aces” director.

Despite some headwind, Payne’s “Heal the World” video already has more than 3 million views on Facebook.

I've never seen anyone as ready for fame as Chewbacca Mom.

I think you can adequately pass or fail an entire society, based on nothing more than their collective interest in "Chewbacca Mom".

Dear Chewbacca mom,
It was 15 minutes of fame, not 15 weeks. Please vacate premises.
Thank you,

If you don't tweet about police brutality but you tweet about Chewbacca mom you're part of the problem. https://t.co/yYCcQMjFHB

Where was Chewbacca Mom's video for the Turkey airport bombings?

Sorry to be negative, but can #ChewbaccaMom please now leave the public stage??

Chewbacca mom is not the moral compass of this country. She's a woman who bought a mask and did stuff in it.

Not to brag, but I have no idea who Chewbacca Mom is and I intend to keep it that way.