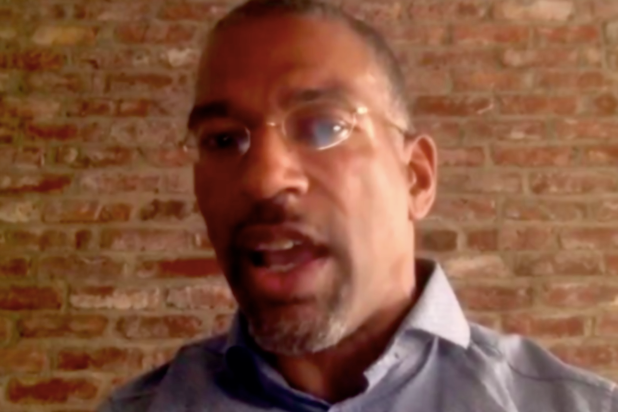 Christian Cooper, who took a video of a white woman appearing to call the cops on him in Central Park, appeared on “The View” Thursday to discuss the reaction to his video, saying he’s been “uncomfortable” with some of the fallout. Amy Cooper has lost her job and her dog and has been receiving death threats.

“First of all, about the death threats: I’ve been unequivocal about that ever since I found out she was getting them. It’s abhorrent and it’s contrary. If you think what she did was wrong — that she was trying to bring death by cop down on my head — then there is absolutely no way you can justify then turning around and putting a death threat on her head. So that’s got to stop. That’s not acceptable. Everything else that’s happened to her — I don’t — I’m uncomfortable with defining someone by a couple of seconds of what they’ve done,” Cooper said.

He went on to call it a “stressful situation” and “moment of very poor judgement,” though he pointed out “there is no excusing that it was a racist act.”

Also Read: Trump Retweets Video of Supporter Saying 'The Only Good Democrat is a Dead Democrat'

The clip was posted on Twitter Monday by Cooper’s sister, who also appeared on “The View.” She wrote in the post, “Oh, when Karens take a walk with their dogs off leash in the famous Bramble in NY’s Central Park, where it is clearly posted on signs that dogs MUST be leashed at all times, and someone like my brother (an avid birder) politely asks her to put her dog on the leash.”

In the clip, the woman is seen threatening to call the cops on Cooper while holding her dog by the collar. She places a phone call and repeatedly identifies Cooper, a Harvard graduate and NYC Audubon Society board member, as “African American.” The dog rescue from which she got her dog posted an update Monday saying she voluntarily surrendered the animal after the “concerned public” reached out to the organization. On Tuesday, her employer, Franklin Templeton, announced she had been fired from her position as a head of insurance portfolio management. She subsequently issued a public apology.

“Does that define her entire life? I don’t know. Only she can tell us if that defines her entire life by what she does going forward and what she’s done in the past,” Cooper told “The View” Thursday. “I can’t answer that so the frenzy makes me uncomfortable.”

Central Park birdwatcher Christian Cooper tells us even though the viral incident “was a racist act,” he’s “uncomfortable with defining someone by a couple of seconds of what they’ve done” and condemns the death threats made against her. https://t.co/6kPvPIdBL9 pic.twitter.com/vkrajmTHrn