Still, I’ll admit I took a double take when I saw the logo for VBS.TV — Vice’s video unit – sprawled across CNN.com on Wednesday.

It appears the Vice crew recently traveled to North Korea, and is allowing CNN to run the footage as part of a “CNN presents VBS” online feature called “The Vice Guide to North Korea.”

There’s even a dedicated landing page for Vice on CNN.

Editor’s Note: The staff at CNN.com has recently been intrigued by the journalism of VICE, an independent media company and Web site based in Brooklyn, New York. VBS.TV is Vice’s broadband television network. The reports, which are produced solely by VICE, reflect a very transparent approach to journalism, where viewers are taken along on every step of the reporting process. We believe this unique reporting approach is worthy of sharing with our CNN.com readers. 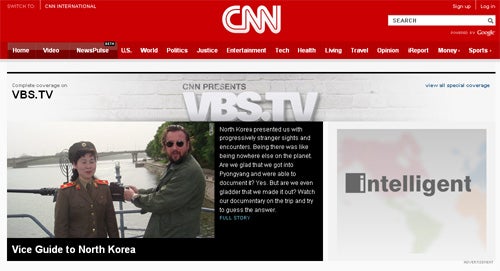 The strange bedfellowship began earlier in January, when CNN ran a report on the gun markets of Pakistan by Vice co-founder Suroosh Alvi.

CNN followed that report up last week with a VBS video of a Vice correspondent shot at point-blank range in Bogota, Columbia while testing a bulletproof vest.

Could we soon see Vice’s vicious “Dos and Don’ts” fashion critiques on CNN?

I wouldn’t bet on that. Yet.