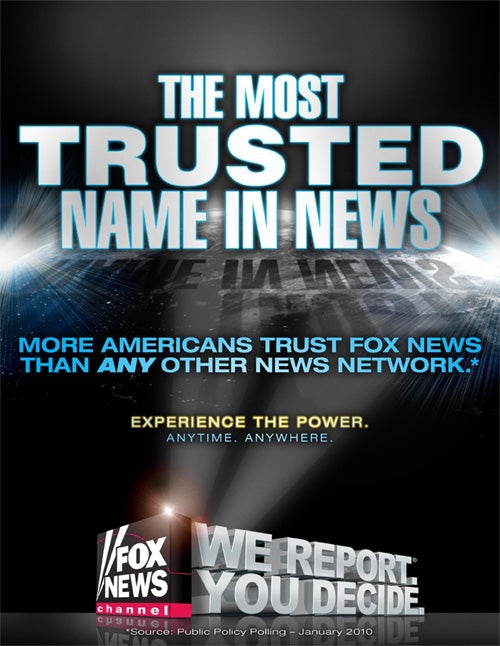 Fox News took out full page ads in Sunday editions of the Washington Post and News Corp.-owned Wall Street Journal touting itself as “The Most Trusted Name in News” – a slogan that’s been used by CNN since 2002.

The ad cites a January Public Policy Polling study – released last week — as its source; CNN’s “trusted” tag is based on a Pew study. (The network, however, uses it less and less these days, opting for “Worldwide Leader in News” instead.)

I asked CNN for a response. They declined to comment.

However, as Time magazine’s James Poniewozik noted in a blog post last week, the study Fox is using to taunt CNN is steeped in politics.

“In broad terms, conservatives and Republicans are more intense and united in their opinions of TV news than moderates and liberals,” he wrote. “They trust Fox, and mistrust everyone else, more uniformly than the other groups mistrust Fox and trust everyone else.”

But something tells me Fox executives won’t be shy in flaunting their new standing. As TVNewser points out, FNC chief Roger Ailes – during an appearance on “This Week” with guest host Barbara Walters on Sunday — repeated the claim after Arianna Huffington challenged him.

“We’re the most trusted name in news,” Ailes said.