If you’re a proud couch potato and an expert binge watcher, you’ve likely already crushed Season 5 of Netflix’s “Cobra Kai,” which debuted on the streaming service Friday. That means you now know that Terry Silver (Thomas Ian Griffith) has been arrested, the Cobra Kai dojo appears to be finished after winning the All-Valley tournament in Season 4 and the good guys have won. Well, at least for now.

In many ways, Season 5 is all about old wounds finally healing and cementing unlikely alliances for the greater good. But Silver’s global expansion plans are still out there floating in the ether and John Kreese’s (Martin Kove) escape from prison complicates the supposed happy ending. In other words, there’s opportunity for more should Netflix renew the series for a sixth season.

“There’s always fertile ground for more story and obviously the set up with how this season ends helps,” Daniel LaRusso himself, Ralph Macchio, told TheWrap. “Season 5 does end in a way where you feel like, ‘OK, we’ve done it!’ From the LaRusso side, Amanda and Daniel could have dinner and not talk about karate for an evening or maybe a whole weekend. But seeds have been planted, maybe international seeds have been planted that say maybe this ain’t quite over yet.” 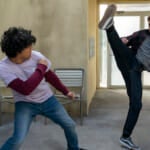 While a global perspective may help direct the “Cobra Kai” story moving forward, it’s also helped turn the series into an even bigger hit in real life. The “Karate Kid” legacy sequel series started as a YouTube original across its first two seasons before being acquired by Netflix. It then became the most-watched show on streaming media in the United States upon its arrival on the platform in August 2020, according to Nielsen ratings.

The show is “made the same” across YouTube and Netflix, according to William Zabka, who plays Johnny Lawrence. “Thankfully, we found our footing at YouTube and they were great. They let us have the creative freedom to experiment and we’ve taken that model and Netflix is letting us do the same thing and what’s working is working. So, the experience production-wise is the same. But the experience as far as the promotion of Netflix and how big and wide it is and the promotional team there has been a whole new universe.”

Macchio agrees, emphasizing that “you feel the global presence that Netflix has.” Around 220 million worldwide subscribers will certainly do that for a show. 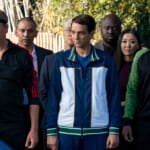