On Monday’s episode of “The Late Show,” Stephen Colbert kicked things off with a gag that imagined what it would have been like if the right-wing antivaxxers bedeviling COVID-19 vaccination efforts had been around when the polio vaccines were rolled out in the 1950s. The results are exactly what you think.

The gag was inspired by a comment Dr. Anthony Fauci recently made about the disinformation surrounding COVID-19 vaccines. He said, “We probably would still have polio in this country if we had the kind of false information that’s being spread now.”

So that’s the thing “The Late Show” imagined. The clip, which played as Monday’s cold open, began with news footage summing up the situation. Then came the gag itself: a fake 1940s-50s newsreel similar to the current events clips that used to play before movies in the decades before TV news programs made them obsolete. (The last American newsreel ran in 1967, in case you’re curious.) 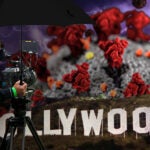 The fake newsreel itself basically takes the kind of insane right-wing talking points that have defined much of America’s COVID-19 discussion and applies them to 1950s current events. Presented by “The Facebook Variety Hour,” the clip features gems like, “Look how thin those vaccine needles are. Could they be made from the whiskers of Stalin’s mustache?”

The clip’s narrator also claims the polio vaccine means “the Cubans can track your children and use their hula hoops as missile targets.” Finally, the clip urges people to buy a button that says “Don’t Salk My South Dakota,” a parody of the real-life “don’t Fauci my Florida” shirts being sold by that state’s governor.

What we’re saying here is that Colbert’s joke is only slightly exaggerated from real life. Watch the clip below: