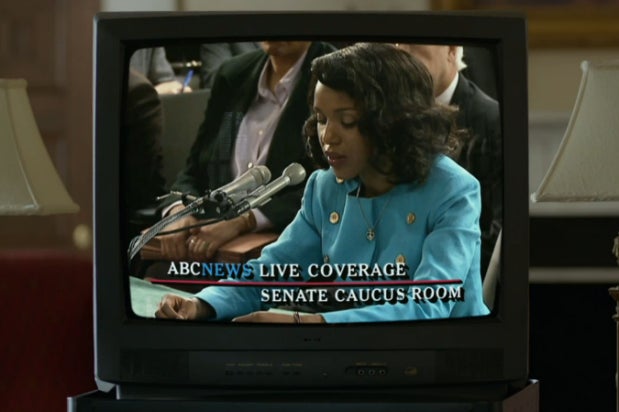 The case for Anita Hill — and all the unknown Anita Hills — is argued persuasively in “Confirmation,” a dutiful, solidly entertaining drama that effectively stirs the viewer’s righteous indignation.

Recounting Supreme Court nominee Clarence Thomas’ 1991 confirmation hearings — and Hill’s accusations that he sexually harassed her — this HBO film will do nothing to boost Congress’ historically abysmal approval ratings. Indeed, “Confirmation” takes a dim view of our elected officials, who are portrayed as craven and spineless.

But the movie, which stars a compellingly muted Kerry Washington, also casts a harsh light on a society in which charges of sexual misconduct are still badly mishandled.

Directed by Rick Famuyiwa (“Dope”) and written by Susannah Grant (“Erin Brockovich”), “Confirmation” makes an effort to seem impartial in this landmark he-said/she-said debate. As played by Wendell Pierce, Thomas is no villain — merely stoic and circumspect — but there’s no question where the movie’s sympathies lie.

With Hill as the film’s main character, we see “Confirmation” mostly through the eyes of this Oklahoma law professor, who reluctantly came forward after being approached by the Senate Judiciary Committee. (It had heard allegations of Hill’s harassment while she worked for him in the early 1980s.) Hill is worried about the repercussions she’ll face by going public — but she decides she must speak the truth.

At times Famuyiwa is so concerned with including the myriad supporting players that the film can be more of a competent procedural than a riveting, insightful exploration of a crucial moment in American politics. But those worries are mostly tempered by the slow reveal of the film’s true agenda.

“Confirmation” uses Hill’s shocking charges as its entry point, but Famuyiwa and Grant focus less on their validity than on how the hearings exposed deep national tensions concerning gender discrimination and sexual harassment. “Confirmation” is careful not to tip its hand about believing Hill. But the film powerfully depicts how casual sexism is around the Capitol, and the world. And it is effectively critical of a culture in which the victim of sexual misconduct is treated with automatic suspicion and scorn once she comes forward.

These points can sometimes be presented ungracefully. (One wonders if a miniseries might have made room for more nuance than a two-hour film could.) Still, they’re often embodied with quiet force by Zoe Lister-Jones and Grace Gummer, who play aides to top-ranking Democratic senators, their annoyance at Hill’s harsh treatment by the Judiciary Committee compounded by their frustration at male bosses aren’t brave enough to do more to defend her.

Washington gives “Confirmation” its emotional anchor, portraying Hill as intelligent and determined but hardly a towering, magnetic feministic icon. Hill’s ordinariness is crucial to the success of “Confirmation,” which turns her accusations into a universal lament that’s undoubtedly shared by far too many women who feared retaliation from their harasser.

Among the starry cast, Greg Kinnear stands out as a principled but ineffectual Sen. Joe Biden, who wasn’t savvy or tough enough to anticipate the bareknuckle approach his Republican counterparts would take to discredit Hill. Jeffrey Wright plays Hill’s attorney, Charles Ogletree, with understated moral anger, while Peter McRobbie hits just the right note as Senator Arlen Specter, who demonstrated shrewdness and pit-bull ferocity while leading the charge to eviscerate Hill’s testimony.

Although “Confirmation” takes Hill’s side — or more accurately, the side of all women accusers — Pierce makes sure that Thomas gets his due. If he’s never exactly a sympathetic figure, the Supreme Court nominee is nonetheless filled with his own sense of indignation, aggressively arguing during the hearings that he’s the victim of — in his provocative phrase — “a high-tech lynching.”

Pierce easily illustrates how Thomas could seem capable of doing the terrible things Hill asserts, while at the same time coming across as so well-composed individual that there’s doubt. But the “truth” isn’t what matters. “Confirmation” instead bears witness to the biases and double standards that come into play with sexual harassment claims.

Unlike the Senate in 1991, the film makes sure these issues get a fair hearing.