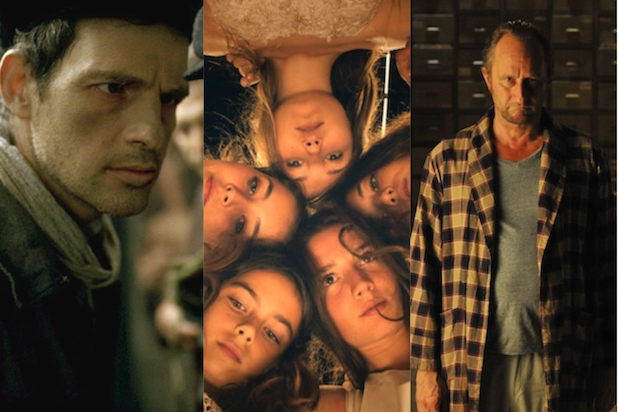 The Oscars race for the Best Foreign Language Film of 2015 had more activity, more frenzy, more screenings and Q&As and parties and campaigning than ever before.

And now that the category’s general-committee voters have seen and voted on all 80 entries, and the executive committee is waiting to meet to determine the final entries on the nine-film shortlist, we’re just about at the same place we were when the contenders were announced in October:

With one or maybe two slam dunks and a lot of question marks.

First-time director Laszlo Nemes’ “Son of Saul,” which premiered in the main competition at the Cannes Film Festival in May, won the grand prize and immediately became the most acclaimed foreign-language film of the year. It was a near-lock to be nominated before the Oscars process began, and it still is. (It’s not a lock to win, though, because it can be a grueling film to watch.)

Deniz Gamze Erguven’s Turkish-language “Mustang,” which debuted in the same festival’s Directors Fortnight section and was to some a surprise submission by France, was the crowd-pleaser of the fall. The eloquent Erguven and her irrepressible cast of young women charmed many an audience when they came to L.A.

But after that, the other 79 entries have for the most part failed to stir up the kind of enthusiasm and passion that was seen in years past. If it’s not fair to call this a weak year in the category, it is definitely not as deep a field as some other recent years.

And perhaps because the field is more level once you get past “Son of Saul,” films have felt emboldened to make a big push. From the time contenders were announced, screening calendars filled up with foreign competitors anxious to show themselves more often than just at their one official Academy screening.

TheWrap showcased 18 of the contenders at our screening series, and competitors had schedules filled with many of the same films. European Film Promotion, which screens for Oscars voters and press, showed a record 27 films during a two-week stretch in November. More films hired publicists, more brought their talent to the U.S. to campaign, and more countries spent more money courting viewers and voters.

More than once, talking to people on all sides of the race, I heard the same comment: “It’s gotten too crazy this year.”

And yet, the buzz seems subdued. “Mustang” was the true breakout from the round of screenings, with the Belgian black comedy “The Brand New Testament,” in which God is a grumpy old man living in an apartment in Brussels, also winning over audiences.

Additional entries that went over well with the Academy crowds and others included the Irish film “Viva,” which is set in a drag club in Cuba; the Brazilian drama “The Second Mother,” featuring Brazilian star Regina Case as a housekeeper; Iceland’s “Rams,” a touching seriocomic tale of two estranged brothers and a herd of sheep; and Jordan’s “Theeb,” which won the audience award at the Palm Springs International Film Festival last year.

The German entry, “Labyrinth of Lies,” is a crowd-pleasing film that is presumed to be a strong contender for the shortlist, though it’s not hard to find voters who were turned off by its more commercially-minded moves. Denmark’s “A War,” Ethiopia’s “Lamb,” Poland’s “11 Minutes,” Finland’s “The Fencer” and Estonia’s “1944” also have fans, based on conversations with voters on the committee.

Six of the nine films are chosen by scores from the general committee, volunteer members from all branches of the Academy who must watch almost 20 films to qualify, and who are thought to have mainstream and occasionally cautious taste.

The final shortlist spots are filled by an executive committee, which will meet this week, learn the identity of the six general-committee selections and choose three more films for that list.

The Academy never announces which shortlisted films are general committee selections and which are executive committee “saves,” but it’s safe to say that if Sweden’s surreal “A Pigeon Sat on a Branch Reflecting on Existence” makes the cut, it’ll be because it had fans on the exec committee.

(It almost certainly has some of those; it definitely has lots of fans among critics.)

Other films that could be in line for saves include a number of South American films, among them Colombia’s black-and-white “Embrace of the Serpent,” Guatemala’s “Ixcanul” (which could also be a general-committee choice), Chile’s “The Club” and the Dominican Republic’s “Sand Dollars.”

One of the best-known of the entries, meanwhile, is likely out of luck. Austria’s submission was the stylish horror film “Goodnight Mommy,” which had U.S. release via TWC-RADiUS and did fairly well in arthouses. The film is elegant and creepy, but graphic enough that one particularly brutal scene caused numerous walkouts at its Academy screening. And if it proved too divisive for the general committee, as it almost certainly did, it is likely too much of a genre exercise to find the champions it needs on the executive committee, which generally looks for weightier fare.

This year’s race also brought the strange case of Afghanistan’s “Utopia,” a three-part story in which an Afghan woman travels to a sperm bank in the UK. The Oscars accepted the entry – and then, after announcing “Utopia” as one of the 81 eligible films, the Foreign Language Film Award Executive Committee changed its mind and disqualified it for having too much English dialogue. The Afghan committee that chooses the country’s Oscar entry was quietly notified and given an opportunity to submit another film, even though the deadline had officially passed. They declined to do so.

TheWrap broke that story a couple of weeks later, on Nov. 15. On that day, the film’s director and producer said they knew nothing about the disqualification, even though it had been communicated to Afghan officials weeks earlier. A day later, Afghan reps said in another publication that they had filed an official protest with the Academy, though nobody at AMPAS ever received that protest.

The furor passed quickly, voters went back to considering the 80 films that were left, and screenings continued unabated.

And now, at the end of the week, the 80 will be narrowed down to nine, and the end will be in sight for a frenzied foreign-language race.