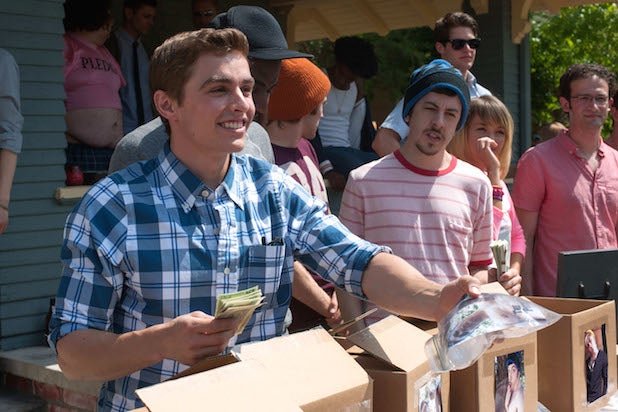 Dave Franco has closed a deal to return as former fratboy Pete in “Neighbors 2” alongside Zac Efron, TheWrap has learned.

Seth Rogen and Rose Byrne also return to star in the sequel, and this time, they’ll be joined by sorority sisters played by Chloe Moretz, Kiersey Clemons and Beanie Feldstein.

Plot details remain under wraps, though a sorority led by Moretz will play a big part in the sequel, which is also bringing back Rogen and Byrne’s friends played by Carla Gallo and Ike Barinholtz.

Rogen, Goldberg and James Weaver will return to produce under their Point Grey banner, while Cohen and O’Brien will serve as executive producers alongside Good Universe’s Nathan Kahane and Joe Drake.

The original “Neighbors” grossed more than $269 million worldwide and the studio has confidence in the sequel, which will hit theaters on May 20, 2016. Universal executives Erik Baiers and Chloe Yellin will oversee “Neighbors 2” for the studio, while Erin Westerman will oversee the project on behalf of Good Universe and Josh Fagen will oversee for Point Grey. Both Westerman and Fagen will co-produce.

Franco recently wrapped production on “Nerve,” directed by “Catfish” filmmakers Ariel Schulman and Henry Joost, and he’ll will next be seen in “Now You See: Me The Second Act.” He’s represented by CAA and Felker Toczek.