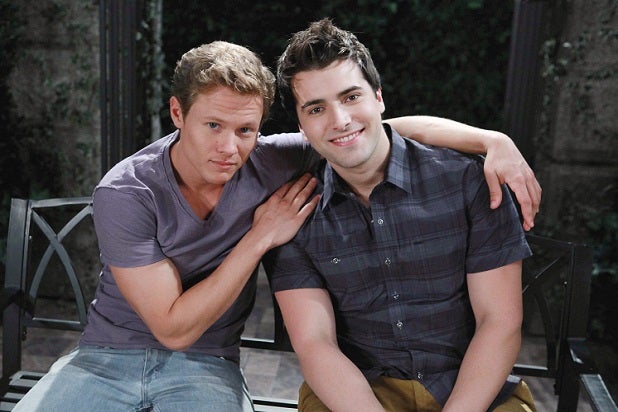 The town of Salem will gain another resident Wednesday, when Guy Wilson steps into the pivotal role of openly gay Will Horton on NBC’s “Days of our Lives,” following the departure of Chandler Massey last year.

In his first interview since taking over the role, Wilson — whose credits include “Breaking Bad,” “Hawaii Five-0” and “Bones” — talks to TheWrap about filling Massey’s shoes, fan expectations, and maintaining the chemistry between Horton and his love interest, Sonny Kiriakis (Freddie Smith).

TheWrap: What are some of the ways you’ve prepared to inhabit a role that’s previously been played by another actor?

Guy Wilson: Deidre Hall, who plays Marlena, Will’s grandmother, has just been a wonderful wealth of information. Before all of our scenes together, we sat down about an hour beforehand and just talked. She said, “Look, this is what Chandler and I have developed. These are some of our inside jokes that our characters share, these are some of our little tics that we have.” It’s these little things she explained that really bring relationships — any relationship — to life on screen, so being able to learn about those things, those types of things that Chandler shared with the other characters, has really helped to make me feel like this transition has been as smooth and as fun as possible. Because I think it’s the relationships, especially on a show like “Days,” that really bring home the realness of it. And that’s really what fans connect with — the realness of the relationships.

Soap fans are notoriously loyal. Are you worried at all that fans of Chandler’s portrayal of Will might be reluctant to accept another actor in the role?

I’m not worried about it, more just because I feel like I understand. It can be frustrating when you’re a fan of an actor or the character and it changes, because, going back to the concept of relationships, people connect with these characters. I certainly don’t take it personally, and if anything, it furthers my admiration for soap fans that they do develop such a connection to an actor or a character. I suppose the attitude that I try to maintain for myself is just to show up and do my job to the best of my ability, and to hold true to the character and the relationship between Will and Sonny. And just have faith that if my acting comes from a true place that, in time, fans — either sooner or later, new or old — will find resonance  with the earnestness that I’m trying to bring to this. I don’t expect everyone to like me, and I don’t think that it’s realistic [to expect that]. And again, this show is very important to people, and I think that’s selfish to expect everyone to embrace you right away. All I can do is the best that I can do.

The recasting happened pretty quickly. Did that present a challenge in preparing for the role?

It did … it’s interesting. It wasn’t as though the information or the resources weren’t there to try to drop into this role as quickly as possible, it was more just doing everything much faster than would normally be the case. But I think if you ask any actor who’s spent a lot of time auditioning, you develop a certain muscle just going out on three or four different auditions for three or four different projects a week or more for different genres. You just learn to exercise that muscle of recognizing, ‘OK … this is the essence of his character, and I need to understand the crux of this story that I’m coming into if I’m going to do this audition well.’ So when this opportunity arose as quickly as it did, I knew that I had it in me to do well at the audition. Fortunately I did well enough. And then showing up to set, it was the same sort of thing — just trusting that I had enough experience just auditioning for tons of different things that I was able to drop in early enough that I was able to hold my own. Now that I’ve been on the show coming up on three months, I feel like I have had the chance to drop in to the level of which one would normally like to prepare. So it certainly happened quickly, but again, because everyone on the show was so gracious and welcoming and supportive, it’s made it much easier than I had initially worried about.

Is there anyone who you would say has been particularly supportive and welcoming?

Oh, well certainly Freddie [Smith, who plays Will’s boyfriend Sonny]. Now, that said, everyone has been [welcoming], but Freddie has gone above and beyond what he can do to help me feel welcome and help me to become naturally a part of this relationship. I have so much admiration for Freddie as a person and an actor, and his commitment to the relationship between Will and Sonny. I think he and I both feel that it’s a very important storyline and a very important relationship. The fact that we share that passion to tell that story truthfully made it pretty easy to for us to connect early on. If you’re a part of a romantic storyline and you and the other actor don’t connect, that makes it really difficult. You really have to work extra hard for those feelings to translate on screen. And fortunately, there is no effort for Freddie and I. It was really easy from Day 1 to connect and sort of nurture this new dimension to the relationship between Will and Freddie. I have so much admiration for him, for his integrity. And beyond Freddie, it’s hard not to mention everybody. Deidre Hall, certainly, who in my mind is just the queen of the show. I am in such awe and admiration of her and her body of work. She’s very supportive and present for me, which has been an honor. And Alison Sweeney, who plays Will’s mother, is one of my favorite actors to work with as well.

Chandler is a two-time Emmy winner for his portrayal of Will Horton. Was it intimidating to inherit the role from someone who had been so lauded for it?

You know, I wouldn’t say I was intimidated, but knowing that Chandler won those two Emmys, it shows that he created something very special. So more than a sense of intimidation, I feel a great sense of responsibility to carry that role forward. And I really feel that I have what it takes to do that, provided I work as hard as I can. So there was never a sense of anxiety or intimidation, and I certainly don’t feel a need to measure up  in terms of accolades or awards — certainly, those are always very exciting, but to me what matters most is just portraying the truthfulness behind the story of Will and Sonny. So knowing that Chandler did such an amazing job, and because he did such an amazing job, the groundwork is there. I just have to keep going in the direction that Chandler put it in. So if anything, he’s made my job easier, because he has established such an amazing character.

No. Of course I want to, but I certainly have come to learn the rules, so I’m not allowed to.