When I wrote about how the preferential system of counting final Oscar Best Picture ballots might work against “Avatar,” I thought I was forecasting a possible outcome to the Oscar race.

Turns out I might have been forecasting what happened at the Producers Guild of America awards, an hour or two after the analysis went up.

At the PGA Awards on Sunday night at the Hollywood Palladium, I was shocked when “The Hurt Locker” took the top prize – figuring, like most other observers, that the commercial success of “Avatar” would be a significant factor in securing its win from the producers. 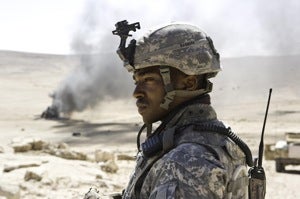 But about half an hour after the show, I was talking to “Inglorious Basterds” producer Lawrence Bender, who asked me if I though the “Hurt Locker” victory had anything to do with the way the PGA counts the votes, where ballots for the films with the least support are redistributed until one film had more than 50 percent of the vote.

That’s the preferential system, the same thing the Oscars use. I had no idea the PGA used it – and neither, judging by the responses I got when I asked around, did most of the other people in the room.

But Bender is right, which means that the thing that I thought might hurt “Avatar” at the Oscars — that the voters who didn’t put it in the top spot on their ballots might rank it low down, hurting its ability to reach the required 50 percent – might well have resulted in the upset PGA victory for “Hurt Locker.”

Warning, “Avatar fans: not only is “Hurt Locker” picking up some key victories, but James Cameron’s film will be facing a system that may not work in its favor.