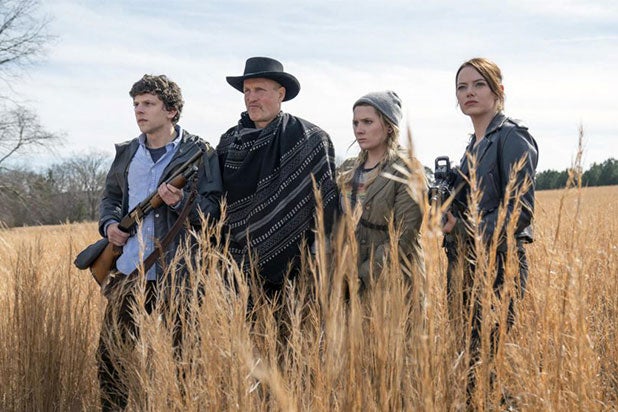 It’s pretty rare for any movie series to get its first sequel a decade after the original movie. But “Zombieland: Double Tap” has done exactly that, hitting theaters a full ten years after “Zombieland.”

That lengthy gap makes what is now the “Zombieland” franchise in a weird place for viewers. Did Sony make a new one because they plan on making more? Or is this more of a fun little one-off reunion movie? With these things carrying fairly small budgets, Sony is probably going to keep its options open, in a “we’ll see how this plays out” kind of way.

That being said, now that “Zombieland: Double Tap” has created a franchise, viewers are going to understandably wonder if the film follows in the footsteps of pretty much every other franchise movie the past few years by including a mid- or post-credits scene that teases future entries.

The answer is yes, there are both mid-credits and post-credits scenes for the sequel to “Zombieland.” The mid-credits scene starts about a minute into the credits, and obviously the other scene is all the way after the credits. So if you need to dart out to the bathroom you will have time between the two scenes.

For those who are just here to find out the answer to the question posed by our headline and don’t want to know anything else, now is the time to close this tab. Because we’re going to talk about those extra scenes here for a second.

Seriously, there are some big cameos after the movie has officially ended, and we’ll be talking about it freely for the rest of this article.

There are spoilers from here on out.

The mid-credits scene takes us back to just before the zombie outbreak, in a callback to one of the first film’s most memorable scenes: the death of Bill Murray. As you may recall, that death scene saw Little Rock (Abigail Breslin) ask Murray if he had any regrets, and he replies “Garfield, maybe.”

So flashback takes place during the press junket for “Garfield 3: Flabby Tabby” — this is not a real movie, as the real version of the “Garfield” movie franchise stopped after two. The junket is attended by several real journalists, including Josh Horowitz and Al Roker.

We see Murray make jokes with the various journalists, but eventually the lengthy bonus scene gets to the point when Roker asks him to pretend to spit up a hairball. While Murray makes his attempt, Roker stands next to him and gets in on the fun. Or so it seems — Roker is actually infected with the zombie plague and is turning into one at that moment.

Also Read: Emma Stone Wants to Make Another 'Zombieland' in 2029

Chaos ensues, and Murray escapes out to the lobby to find a lot more infected. He fights through them while uttering pithy Garfield quotes, closing out the scene with a “I hate Mondays.”

The post-credits scene is an outtake from one of the junket interviews, and it sees Murray doing his hairball again —  but with a twist. He says he’s going to do a hairball in Spanish this time, and it sounds slightly different when he does it.