RepStevenSmith is a parody, lampooning Tea Party politicians.  His bio identifies him the Republican representative for Georgia’s 15th Congressional District, but Georgia only has 14 districts.  He also self-identifies as a capital-p “Partisan,” and alludes to a Harvard eduction. Columbus, Ga., newspaper Ledger-Enquirer even reported that Smith’s profile picture appeared to be lifted from Men’s Big & Tall apparel sites.

Also Read: Donald Trump Gave $0 to Charity in Past 5 Years

But Michael Cohen, an executive vice president at the Trump Organization and special counsel to Donald Trump, retweeted Smith’s endorsement of Trump on Sunday night. 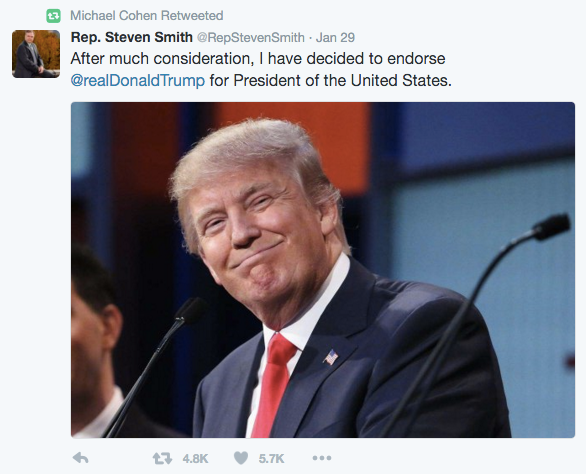 Twitter has been instrumental to Trump’s campaign for the Republican nomination, with his accounting drawing more than 7.5 million followers. Trump has leveraged that giant platform to dole out insults and attack people who he perceives as on the offensive against him.

Cohen appears to be a little less tweet savvy. Though he has 38,600 followers, he’s only tweeted about 4,250 times. His billionaire boss, meanwhile, has racked up over 31,600 tweets.