“Don’t Worry Darling,” a movie whose surrounding controversies have somewhat managed to eclipse the actual movie, is finally here.

And beyond the din of the tabloid machine, the movie is a mystery – less a whodunnit than a what-the-hell-is-going on, as we watch the life of 1950s housewife Alice (Florence Pugh) unravel as Alice discovers the disturbing truth about her idyllic desert enclave. (She is very much through the looking glass here.)

What is going on in her community? What is the Victory Project? And what is Chris Pine’s deal, anyway? For that, we must have an in-depth discussion of the film’s ending, so consider yourself warned.

Major spoiler warning. If you haven’t watched “Don’t Worry Darling” yet, seriously turn back around now. We’ll be here when you’re ready.

A Brief History of the Victory Project

We are introduced to Alice in the middle of a debaucherously wild weekday mixer. She and her husband Jack (Harry Styles) are entertaining friends of theirs in their gorgeous midcentury home. (Seriously, it’s hard to take your eyes off of that record console. Yum!)

Alice’s best friend Bunny (Olivia Wilde) and her husband Bill (Nick Kroll) are there, and some of their other friends are too. All the men in the seemingly utopian hamlet of Victory, California, work on a mysterious enterprise called the Victory Project. Is it a government job? Private? Nobody knows. But the liquor cabinet is always full and the neighborhood is perfect. (The production shot in parts of Palm Springs, including at the historic Kaufmann House, designed by Richard Neutra.)

This is where we first meet Alice. She isn’t totally disillusioned, at least not yet. She has a good relationship with her handsome husband (there are a few sex scenes between the two), she likes her friends and everything is taken care of for her. She cleans the house during the day, hangs out with the ladies and meets her husband when he gets home from work with a martini and a steak. What is there to worry about? As it turns out, a lot. 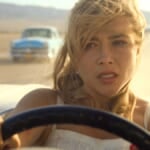 Also Read:
What ‘Don’t Worry Darling’ Faces at the Box Office After Months of Controversy

The Strange Case of Margaret

Before we get to what is really going down in Victory, we have to discuss one of the movie’s most compelling characters – Margaret (Kiki Layne), another one of the housewives who had an “episode.” She wandered into the desert surrounding the town with her young son and came back alone. She can often be seen with her son’s red toy plane, a reminder of what she’s lost (or is it what’s been taken from her?)

She’s over-medicated by the creepy company doctor, and most of the housewives, like Bunny, dismiss her concern that things are not what they seem. She’s being dramatic. She doesn’t know what she’s talking back. Or worse still: she killed her son and left him out there. Even after Margaret slashes her throat and falls from the roof of her adorable little home, the gossip machine in Victory rages against her. She was nuts, they concur. Except for Alice. Alice saw her slice her neck and fall off the roof.

Alice begins to wonder too: what if Margaret is right? What if, for all its rightness, there is something deeply wrong with Victory? 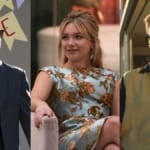 Throughout the course of “Don’t Worry Darling,” Alice has episodes or visions or something. While cleaning the window she gets smashed up against the glass, the wall behind her pressing her up against it. The image in her mirror seems to have a lag. She crushes an egg in her palm and there’s nothing there; no yoke. She hums a tune but doesn’t know where she heard it. And she is deeply distrustful of Frank (Chris Pine), the cultlike leader of the town and the man behind the mysterious Victory Project. This is especially true after, while at a party at Frank’s house, Frank watches Alice and Jack have sex.

She starts to gently prod. Some couples have the exact same story of how they met. Most everybody cannot remember their life before moving to Victory. The eerie perfection of the town becomes eerier, more openly sinister.

Then there’s an incident with Alice riding the trolley around town. She’s staring out the window and sees a plane, clearly in distress, crash outside town in the desert. She forces the trolley car driver to stop and she walks out, into the infinite heat, on foot. She finally comes upon the mountain where the Victory Project is supposedly held. She climbs to the very top and puts her hands on the glass. She sees a vision. A place outside of Victory. And a different version of herself.

She wakes up and is prescribed pills by the quack doctor (Timothy Simons) and told it was all a dream, she should just forget about this regrettable episode. She pretends to be the good little housewife. But she has changed.

Alice finally confronts Frank about it at dinner. Everyone, including Frank’s icily perfect wife Shelley, is appalled and basically starts leveling the same accusations against Alice that they did against Margaret. She is soon ostracized. But Alice resolves to figure out what is really going on. And, with any luck, to free herself from Victory. 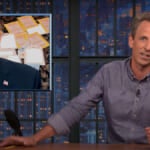 The Other Side of the Mountain

She attempts to leave but is ratted on by her loving husband. Men in “Us”-style red jumpsuits take her away. They administer electro-shock therapy. And afterward, she returns home. It’s there that she confronts Jack about their real life … that other place.

And here we are, the big revelation about Victory. It’s a doozy. Are you ready?

But what is Victory, you ask?

Well, this is where things get fuzzy. We see Alice on a bed in their apartment; she’s got clamps over her eyes and the world of Victory is being projected into them (onto them?) via some lasers. Honestly, it’s pretty unclear, mostly because the production design is so clunky. They were clearly going for a David Cronenberg/”Clockwork Orange” vibe (since the device also props her eyes open) but it is wonky and unconvincing. This is the world of Victory – it’s basically “The Matrix.”

This idea does open up an unfortunate wormhole that is full of bigger questions and potential plot holes, like is this technology readily available to consumers? Who is programming this world? What purpose was the technology originally created for? As Jan. 6 taught us, right-wing extremists aren’t exactly the brightest folks in the world. To think that they engineered this entire antifeminist paradise is really a stretch, even for a movie clearly rooted in the what-if social commentary of something like “The Twilight Zone,” where the metaphor is obviously more important than the method.

Still, she knows she has to go back to the tower to be free. She steals Jack’s car and hauls ass across the desert, with the red jumpsuit security men and Jack and his drinking buddies all in pursuit. The car chase is actually super entertaining, but again, it’s worth wondering that if she can “see the code,” why doesn’t she do more with that information? As she races towards the tower, it starts to ignite other housewives.

Before her escape, Bunny admits that she’s in the simulation because it returns her to the children she lost in the real world (big “WandaVision” energy), while Shelley stabs Frank for his transgressions (we assume people die in real life too? Or maybe that’s just “The Matrix”).

Armed with her knowledge of the truth and her will to survive, she reaches the tower. She puts her hands up to the glass and … who knows? Will she find happiness? Or will she be forever condemned to this prison? Don’t worry darling.

Also Read:
The Oscar Race After the Festivals: ‘The Fabelmans’ Is on Top, but Dangers Await
x