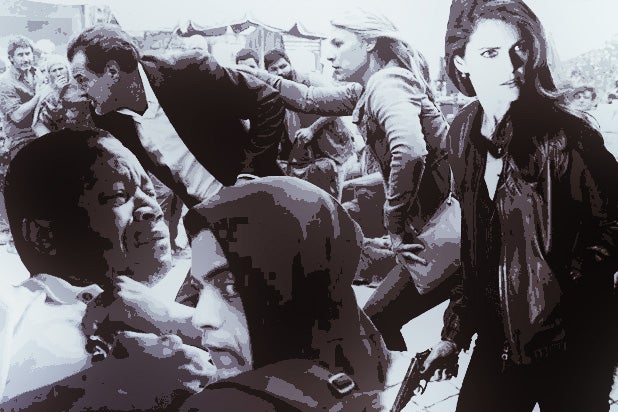 In case you didn’t know this from the current presidential race, Thursday’s Emmy nominations say it loud: Americans these days are pretty shaken up.

Paranoia looms large in the programs honored by voters at the Television Academy. FX’s “The Americans” — finally getting major Emmys love after four seasons — is an allegory about how suburban normalcy can be completely faked (spoiler: Mom and Dad are Soviet spies). “The People v. O.J. Simpson” retells the story of an all-American football great who winds up on trial for double murder, a poster child for America’s toxic racial politics.

Then there’s the ultimate paranoid fable, USA’s “Mr. Robot,” about a depressed New York hacker who’s being pursued by shadowy forces — but hey, the guy has a shaky grip on reality, so who knows.

Amid all the talk of “peak TV,” it’s become apparent that a lot of that TV is dark indeed. Remember when people said “Hill Street Blues” seemed so gritty and realistic? Compared to today’s most-celebrated dramas, Steven Bochco’s groundbreaking cop drama looks like a picker-upper.

Even the nominated comedies contain a whiff of bitterness. “Master of None” is a sort of gender-reversed “Girls,” with Aziz Ansari as a millennial adrift in an uncaring contemporary America. “Unbreakable Kimmy Schmidt,” also from Netflix, is about a relentlessly cheery young woman who escapes from a cult and finds refuge in a world she doesn’t understand how to live in. Is that the quintessential metaphor for early 21st century America? Maybe.

Art reflects life, or at least, people’s perceptions of life. And there’s no doubt that Americans have plenty to be bummed about. The economy has been mired in uncertainty and low growth for nearly a decade. Parents worry their kids will have an even harder time than they have. Edward Snowden, the Panama Papers and other cases involving leaks of sensitive data have further eroded confidence in government, financial services and the media. Videos of police shootings have pushed racial tensions to the boiling point.

Of course, Americans also have some blessings they are choosing to ignore for the moment. Crime is low by historical standards; the nation remains a standard-bearer for the world economy, especially after the Brexit has clouded the future of London and the United Kingdom. The November presidential election could even usher in a new era of good feelings and prosperity.

Go ahead, laugh. Clearly we need something to cheer us up.