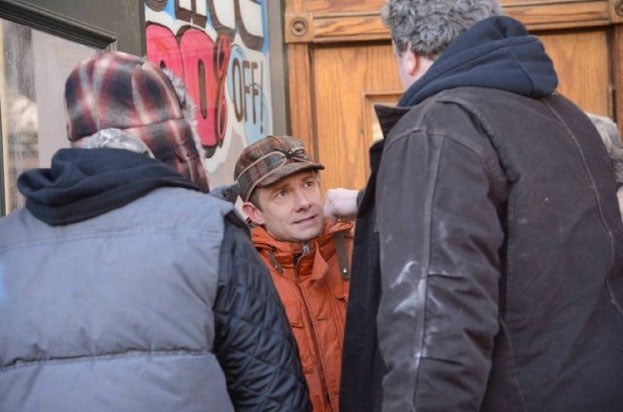 A TV version of “Fargo” seems like a very bad idea until you start watching it.

Showrunner Noah Hawley has pulled off an improbable feat with FX’s “Fargo,” transforming a quirky Coen brothers movie about the Great Frozen Midwest into an engaging series that channels the film’s spirit without getting too bogged down recreating it.

Hawley, no dummy, plays with viewer expectations in Tuesday night’s series opener, introducing a familiar setup and characters before pivoting in a different direction. By the end of the 90-minute episode, it’s clear he’s following his own playbook. I quickly gave up any hopes of a character similar to Marge, the pregnant cop Frances McDormand so memorably played in the 1996 movie.

And I didn’t even miss her that much.

Also read: ‘Fargo’ Boss Noah Hawley on the ‘Hubris or Foolishness’ of Adapting the Coen Brothers

Instead, there’s Molly, a thoughtful, youngish cop played by newcomer Allison Tolman, and Lorne Malvo, a sociopath gleefully inhabited by an almost unrecognizable Billy Bob Thornton (there is such a thing as too much plastic surgery, his altered visage serves to remind). There’s also sad-sack insurance agent Lester Nygaard (Martin Freeman, aka Bilbo Baggins, a fairly good facsimile of William H. Macy‘s character in the movie) and a host of quirky characters that wouldn’t seem out of place on “Twin Peaks.”

True to form for a high-end limited cable series, TV’s “Fargo” also has violence, sex and high production values. Like the Coen brothers before him, Hawley has great fun sending up Midwestern mores, and Minnesota mores in particular.

Labelled at the outset a true story, the story picks up in 2006 when henpecked Lester runs into Malvo in the hospital after his high school nemesis breaks his nose. They start talking, and before you know it a flustered Lester suggests his new acquaintance kill the bully for him, “Strangers on the Train”- style.

He’s not serious, but Malvo doesn’t need much encouragement. This mysterious fellow, who might as well be called Malevolent, likes messing with people and seeing what he can provoke them into doing, whether it’s getting a motel clerk to pee in a gas tank or provoking a mild-mannered insurance agent to murder.

It doesn’t take long after Malvo’s arrival for the body count to start adding up, and for the police to start connecting the dots. Of course, they’re not all exactly competent.

Also read: ‘Fargo’ Star Billy Bob Thornton: Why ‘Fargo’ and I Are Coming to TV

The show lays on the deadpan humor — “What if you’re right and they’re wrong” reads a dopey poster of one fish going the opposite direction of his peers in Lester’s basement. “Fargo” especially has fun with some of the dim characters.

At times, however, Hawley goes a little too heavy on the quirk, and Thornton, who last regularly appeared on TV in the John Ritter political comedy “Hearts Afire” in the early 1990s, overly indulges in that smirk. Bits between mob enforcers Mr. Numbers (Adam Goldberg) and Mr. Wrench (Russell Harvard) also wear out their welcome.

But these are quibbles. The overall quality of TV’s “Fargo” is high; a few episodes in, I was definitely hooked. Hawley, who previously worked on “Bones” and “The Unusuals,” approached his version of “Fargo” as a very long movie, broken up in many parts. Will this ostensibly limited run series return if it does well? You betcha.