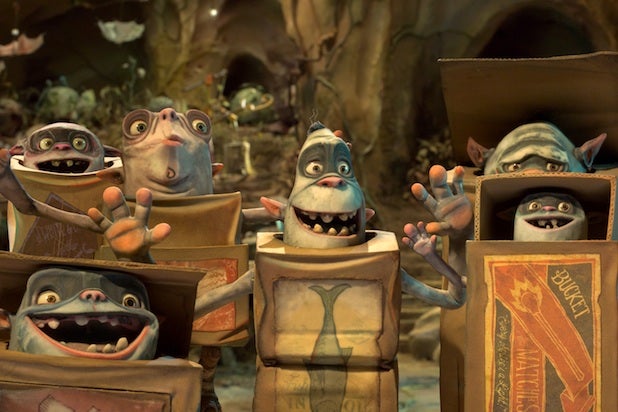 Laika and Focus Features, the two companies behind the animated feature “The Boxtrolls,” will continue their partnership on Laika’s next three projects, it was announced Friday by Focus CEO Peter Schlessel and Laika president/CEO Travis Knight.

As with the three movies that the companies have partnered on previously, Focus will distribute the next three movies domestically, while Universal Pictures International will release them overseas.

Focus opened “The Boxtrolls” nationwide last weekend to a $17.3 million gross, marking the biggest debut yet for a Laika movie. “The Boxtrolls” follows the successful and acclaimed Focus and Laika animated films “Coraline” and “ParaNorman,” each of which grossed over $100 million worldwide.

“The Boxtrolls” has also been released in 16 international territories to date, including the United Kingdom, where it was #1 at the box office for two weeks in a row; and Australia, where after just over two weeks it has already grossed more than either “Coraline” or “ParaNorman” did during their entire runs.

“I am very pleased to continue our relationship with our friends at Laika. Travis and his company have elevated the art of animated films and we are proud to be part of their success,” said Schlessel.

“Focus and Laika are kindred spirits,” said Knight. “Over eight years and three films we’ve forged an incredible bond over a shared love for, and commitment to, bold, distinctive, and enduring stories. Peter and his superlative team have created a welcoming home for original voices and enriching, challenging filmmaking. They’re the bravest studio in the world. We look forward to many ongoing cinematic adventures with our Focus/Universal family. The best is yet to come.”