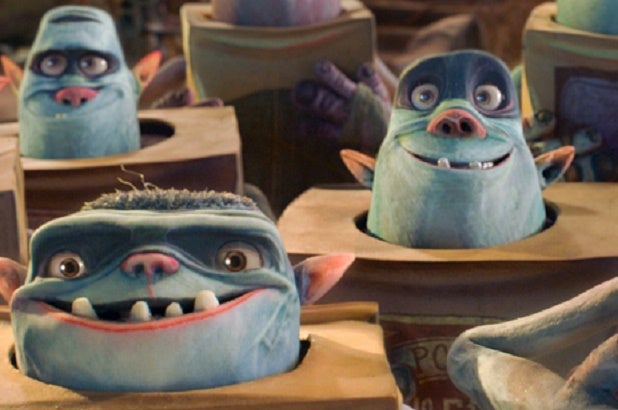 It would be easy to overlook the surprisingly strong opening of “The Boxtrolls” amid the hail of box-office bullets fired by Denzel Washington‘s “The Equalizer,” which won the weekend with an explosive $35 million debut.

But the $17.2 million opening by the 3D stop-action animated family film was notable because it’s the best ever for Laika Entertainment, the production company headed by Nike founder Phil Knight and run by his son Travis, who is both the CEO and an animator on its films.

Any animated movie scoring at the box office is news this year, which is one of the weakest in recent memory for the genre. So successfully selling the British tale of fairly gruesome-looking, cave-dwelling trash collectors who adopt a young orphan — based on “Here Be Monsters” by Alan Snow — represents a coup for the Focus Features marketing team.

Of course, kids loving stuff that grosses out their parents is a time-honored tradition, but that’s not how Christine Birch, president of marketing at Focus, and her team chose to sell the film about creatures most would call creepy.

“I would call them unorthodox,” Birch told TheWrap. “And that’s what we tried to do with the campaign — to go beyond what they looked like and focus on what they represented, and their aspirations. They’re tinkerers, inventors they build from things that others throw away.” (Note to parents: positive message on avoiding superficiality there.)

The film’s voice talent like Ben Kingsley, Isaac Hempstead Wright, Elle Fanning and Nick Frost worked the TV talk circuit, but there were clearly some opportunities for, ahem, out-of-the-box marketing.

“One of the things we talked about was the primal appeal of boxes,” Birch said, “and we had a great integration video play with Amazon.” The online giant’s homepage featured a video short that showed youngsters how to turn themselves into “Boxtrolls” with Amazon delivery packages.

Then there was the “Boxtrolls” Bug Truck, literally a roach coach. Focus and Laika enlisted a chef to create six-legged delicacies — like those favored by the film’s trolls — and drove around L.A. offering insect tacos and such. They rolled it out at Comic-Con in San Diego, where fan boys ate it up.  “I think we ran out of bugs there,” Birch said.

While this year’s dearth of family fare — the last animated movie in theaters was “Planes: Fire and Rescue” in July — in theory created an appetite among the minivan set, it also meant Focus had to provide its own momentum.

“We’ve had some piece of advertising attached to every family film that’s come out going back more than a year,” Birch said. “We knew we had to start early, because ‘Boxtrolls’ was not an established brand, and we had to build consumer awareness from scratch.”

The Laika brand is clearly building. “The Boxtrolls” debut topped the openings of 2012’s “ParaNorman” ($14 million) and 2009’s “Coraline” ($16.8 million). Those movies were budgeted at around $60 million like “Boxtrolls,” and took in $107 million and $125 million respectively, so this should be another financial win for Laika and Focus.

“We want Laika to represent quality and complexity, which are typically part of the animated movies that work the best,” said Birch.

Who knew that eating bugs would be part of the recipe?