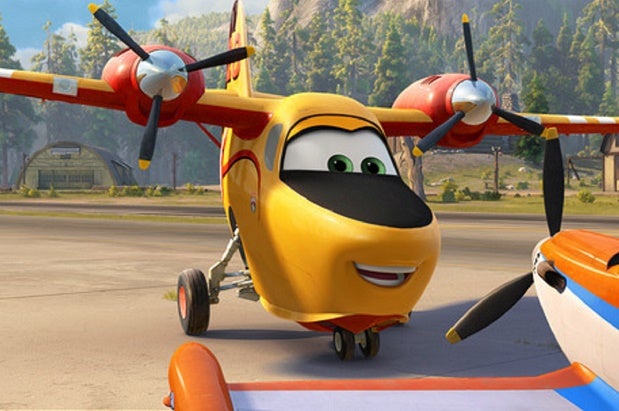 Disney’s sequel “Planes: Fire and Rescue” takes off in theaters Friday, the latest entry in what’s been a very down year for animated movies at the box office. Call it the post-“Frozen” hangover.

Warner Bros.’ “The LEGO Movie” was a breakout smash when it opened in January, but nothing has come close since. “Planes 2” is expected to open in the $20 million range, and with its $50 million production budget it should make money for Disney, but it’s not going to turn the tide.

The short story is that a couple of the movies expected to be very big — Universal’s “Minions” movie and Pixar’s “The Good Dinosaur” — were moved to next year, and “How to Train Your Dragon 2” and “Rio 2” failed to get the bump over the original movies that most expected.

Like the overall box office, which is running about 5 percent behind last year thanks to a very soft summer, this year’s animated movies suffer by comparison to the record-breaking 2013.

At this time last year, all four animated wide releases — Disney’s “Monsters University,” Universal’s “Despicable Me 2,” DreamWorks Animation’s “‘The Croods” and Fox’s “Epic” — were all over $100 million.

The first three became major hits. “Despicable Me 2” brought in $970 million globally, “Monsters U” totaled $743 million and “The Croods” stomped to $587 million. And Disney’s blockbuster “Frozen,” which was released in November of last year, would go on to haul in a huge $1.2 billion. The tale of Anna and Elsa has taken in more than $137 million in 2014, more than any animated film except “Dragon 2.”

Since “The LEGO Movie,” which had just a $60 million production budget and made $267 million in the U.S. and $468 million worldwide at the start of the year, there have been six wide animated releases.

DreamWorks Animation’s “Dragon 2” has been the biggest. It’s taken in $153 million domestically since debuting in June, but won’t match the original film’s $217 million total. It’s looking better overseas, where it has just passed $200 million (the first film did $197 million) and has yet to open in several key territories for distributor Fox.

It’s a similar story for “Rio 2,” a July release from Fox’s Blue Sky Studios. With $130 million, it couldn’t top the $144 million domestic haul of the original. Its $357 million foreign exceeded the original’s $341 million, but not by as much as the studio would have liked.

“Mr. Peabody and Sherman,” based on the 1960s TV show, couldn’t break out. It took in $111 million domestically and $157 million abroad, but with its $145 million production budget, DreamWorks Animation was forced to take a $57 million writedown in April.

The others weren’t expected to make much of a ripple, and didn’t.

Low-budget import “The Nut Job” brought in $64 million domestically after its January debut, giving Open Road Films a hit with its first animated release and spawning a sequel. Hayao Miyazaki‘s “The Wind Rises,” was the No. 1 film at the Japanese box office in 2013 and earned a Best Animated Feature Oscar nomination, but topped out just over $5 million when it was released in the U.S. in January. And Clarius Entertainment’s “Legends of Oz: Dorothy’s Returns” bombed spectacularly in May, and became a nightmare for some investors.

There are a handful of animated films to come this year.

Focus Features has “The Boxtrolls” from Laika, the company behind “ParaNorman,” set for Sept. 26. And Fox will roll out Reel FX Creative Studios’ “The Book of Life” on Oct. 17.

November is traditionally a big month for animated movies, and has served as the launch pad for animated blockbusters like “Frozen,” “The Incredibles” and “Madagascar: Escape 2 Africa.”

This year will bring “Big Hero 6,” based on the Marvel superhero team of the same name, from Disney Animation on Nov. 7. And Fox will roll out DreamWorks Animation’s spinoff “Penguins of Madagascar” on Nov. 26.

“‘Big Hero 6’ looks like it has a very big upside,” said Bock, “and with that release date and the holidays to play through, it should hit $200 million.”

With “Good Dinosaur” and “Minions” added to next year, 2015 will have a leg up. The lineup was already strong, with DWA’s “B.O.O: Bureau of Otherworldly Operations” and “Home,” Blue Sky’s take on Charles Schultz’s classic comic strip “Peanuts,” along with “The Spongebob Movie: Sponge Out of Water” from Paramount and Nickelodeon. That’s in addition to the sequels “Hotel Transylvania 2” and “Kung Fu Panda 3.”

“You look at the release calendar over the next several years and there are major animated releases already filling in nearly all of the key release dates,” Bock said. “We won’t see a year like this again any time soon.”