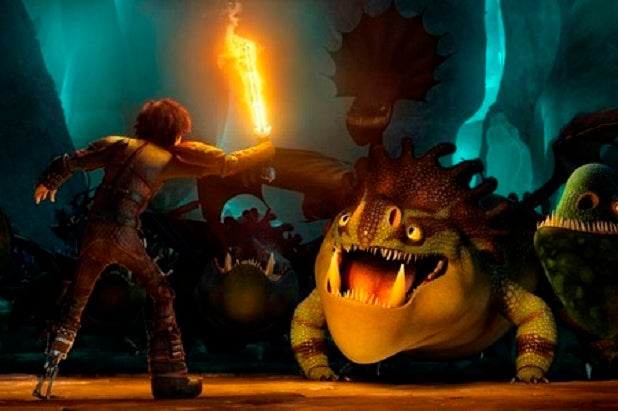 That second-week tailwind for “How to Train Your Dragon 2” failed to materialize at the box office this weekend, and it looks now that the DreamWorks Animation sequel will have a tough time matching the domestic total of the original film.

“Dragon 2” took in an estimated $25.3 million over the three days, good for third behind Sony’s winning one-two sequel punch of “Think Like a Man Too” and “22 Jump Street.” Its domestic total after two weeks is $95 million.

The follow-up tale of Hiccup and Toothless fell roughly 48 percent from its opening. That’s not bad, but it’s not terrific either, given the film’s excellent reviews, its “A” CinemaScore and the lack of competition from other animated and family fare.

Also read: Kevin Hart’s ‘Think Like a Man Too’ No. 1 But Can’t Match Original at Box Office

By comparison, the similarly well-reviewed original film fell off just 34 percent in its second go-round. The first “Dragon” went on to take in $217 million domestically; things could change in the next few weeks, but “Dragon 2” now looks likely to wind up with a domestic haul well under $200 million.

The stakes are high for DreamWorks Animation, which was forced to take writedowns following its last two releases, “Mr. Peabody and Sherman” and “Turbo.” The studio has already set a third “Dragon” film for June of 2016.

No one is talking writedowns on “Dragon 2,” but the relatively soft second-week showing prompted B. Riley analyst Eric Wold on Monday to revise his estimates for the film and DreamWorks Animation’s 2014 and 2015 revenue projections downward.

“Even though the sequel is still 3 percent above the original over its second weekend and solid legs and a lack of animated competition in the coming weeks could drive a total closer to $200 million, we are conservatively dropping our modeled estimate to $175 million,” Wold said.

What could turn the tide for “Dragon 2,” which was produced for $145 million, is foreign returns.

The original film took in $277 million — a relatively low 56 percent — of its $495 global haul from overseas. Given the goodwill from the first movie and the expansion of the foreign box office, it’s safe to presume the sequel can top that.

It’s off to a solid start. It brought in $43.2 million over the weekend, raising its foreign total to $76.3 million in two weeks, and some of the numbers were particularly impressive. It took in $8.3 million in Australia and brought in $7.3 million from Mexico and $6.8 million from soccer-obsessed Brazil, both three times the opening of the first film in those territories.

Wold still sees the film’s foreign prospects as too early to call, but looking strong. Nonetheless, he revised his forecast of $500 million overseas for “Dragon 2” downward to $400 million. But he didn’t see the higher figure as out of range.

“Through this past weekend, ‘Dragon 2’ has still only opened in 32 international territories — with numerous key markets scheduled for the upcoming weeks, including many European markets held until after the World Cup,” he said.

“With $76.3 million in box office generated by 32 territories after two weekends compared to $42.3 million for the original movie in 36 territories, $500 million could still be generated internationally,” Wold added.

“Dragon 2” should still be a financial success for DWA and distributor Fox, but it’s clear now that overseas will determine just how how high it will fly.