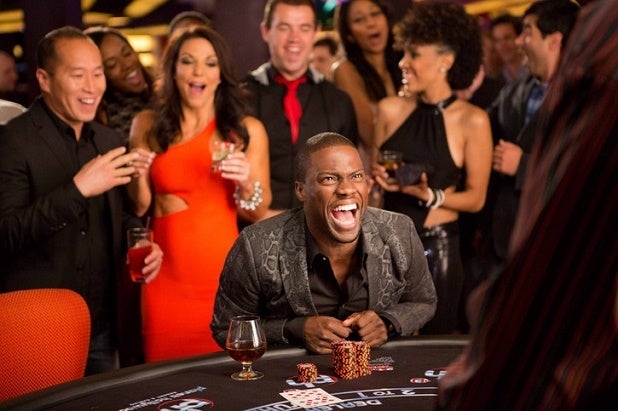 The Tim Story-directed bachelors-and-bachelorettes romp took in $30 million to push Channing Tatum and Jonah Hill‘s R-rated buddy cop bromance, last weekend’s top film, into second place with $29 million. The weekend’s other wide opener, the Clint Eastwood-directed adaptation of the Broadway musical “Jersey Boys,” finished fourth with $13.5 million behind holdover “How to Train Your Dragon 2” and just ahead of Disney’s “Maleficent.”

The tally for the PG-13-rated “Think Like a Man Too” gave Hart his second No. 1 movie this year, but it came in under the $33.6 million debut haul of the original “Think Like a Man” in 2012. Hart has a huge social media following, which gives his films added potential for breakout box-office performances, but that didn’t materialize.

The opening is well under the $41.5 million the last Story-Hart collaboration, “Ride Along,” managed in January, but more than the $25.6 million debut of “About Last Night,” another battle-of-the-sexes comedy featuring Michael Ealy and Regina Hall, who also star in “Think Like a Man Too.”

It was a subdued weekend at the box office overall, roughly 30 percent under the same frame last year when “Monsters University” opened to $82 million and “World War Z” debuted to $66 million. This summer’s box office is running roughly 9 percent behind last year’s, which was the biggest ever. Part of it is the lack of a dominant blockbusters like last year’s “Iron Man 3.” No movie has been able to repeat at No. 1 this summer and this marks the eighth consecutive week that there has been a new leader.

“Think Like a Man Too” played overwhelmingly African-American (75 percent) and female (63 percent) and 41 percent of the audience was under the age of 30. Moviegoers gave it an “A-” CinemaScore, liking it much more than the critics who have it at just 22 percent fresh on review aggregation site Rotten Tomatoes.

Will Packer is the producer of the $28 million comedy, which was in 2,225 theaters. Steve Harvey, who wrote the book “Act Like a Lady, Think Like a Man” upon which the movies are based, is an executive producer.

Big-screen adaptations of Broadway musicals like “Les Miserable,” “Chicago” and the all-time leader “Grease” have clicked big-time at the box office, but the “Jersey Boys” opening shows it’s not in that league.

Warner Bros. will have to hope the tale based on the 1960s singing group the Four Seasons finds its audiences over the next few weeks, and the “A-” CinemaScore it received from audiences will help counter the critics, who have been lukewarm.

“22 Jump Street” crossed the $100 million mark in its second weekend and is up to $114million domestically. The comedy directed by Phil Lord and Chris Miller (“The LEGO Movie”) dropped roughly 49 percent from last weekend’s big debut.

The DreamWorks Animation sequel “How to Train Your Dragon 2” also fell off 49 percent and wasn’t far behind the leaders in third with $25 million. The Fox-distributed family tale is over $95 million domestically after two weeks.

Disney’s “Maleficent” was fifth with $13 million in its fourth week. That lifts the domestic total for the live-action “Sleeping Beauty” update starring Angelina Jolie to more than $185 million.

The Tom Cruise sci-fi thriller “Edge of Tomorrow” captured sixth place with a $10.3 million third week. The well-reviewed action movie is now up to $75 million domestically.

Fox’s low-budget teen drama “The Fault in Our Stars” is about to top the $100 million mark. The Shailene Woodley-Ansel Elgort romance brought brought in $8.6 million in its third weekend.

Fox’s Marvel mutant mashup “X-Men: Days of Future Past” is the summer’s biggest movie domestically, with $217 million, and has taken in more than $670 million globally. It added $6.2 million in its fifth week for eighth place.

Jon Favreau’s foodie comedy “Chef” beat out “Godzilla” for ninth place. The indie comedy distributed by Open Road Pictures is near $17 million domestically after adding $1.84 million this week, its ninth. Its off just 16 percent from last week.

“Godzilla,” the Legendary Pictures-Warner Bros. update on the classic Japanese monster movie, added another $1.82 million this weekend and is up to more than $195 million domestically after six weeks, and more than $440 million globally.