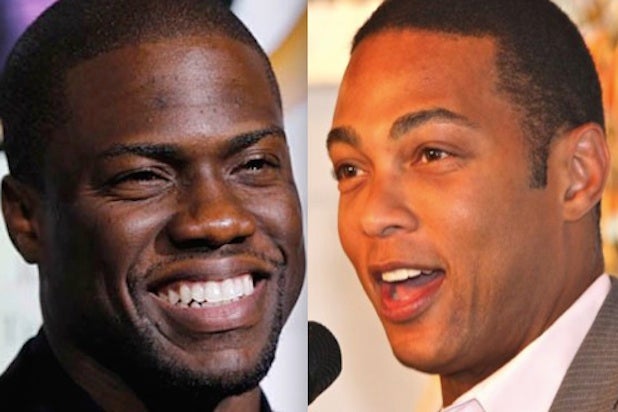 “Well, I ain’t never call no one no Redskin. I’ve never been mad like, ‘get out of this restaurant, you Redskin.'” Hart, who’s starring in new release “Think Like a Man Too,” said.

“We’ve been called the n-word,” Joyner said.” Who has ever been called a Redskin other than the team? Is it fair to compare being called the N-word?”

They two debated semantics over the terms of their debate, then got into the heavy stuff.

“It’s not in the same bar,” Hart said. “We don’t know how (Native Americans) feel personally because we’re not them, but this has existed for twenty years.”

“Now — to say it’s a problem, it’s a team name,” Hart said. “Nobody uses that word in a way to where it’s insulting, it’s celebrated, you have fans who celebrate the Washington Redskins, they rejoice, whether it’s win or lose, we love the Redskins.”

“What if they were called the Washington Blackfaces, Washington N-words?” Lemon asked.

Lemon said he was only talking about the origin of the word over time.

Listen to the exchange: