“We have been working towards this moment for the last nine months and are thrilled to debut Fox Weather with our talented and innovative team, including Amy Freeze whose versatility and decades of experience are a great addition,” Berg said in a statement. 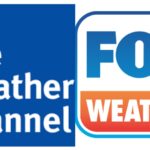 Fox Weather will be available online and through an app that will roll out for iPhone and Android users, as well as on Fox Now, the Fox News app and Tubi.

The new streaming service was first announced last December and the platform has made a series of hires since. Berg moved from president of news operations at Fox News to her new role in preparation for the launch. The premiere was originally scheduled for the third quarter of this year.

Fox Weather features an integrated website and streaming service featuring local, regional and national updates as well as live programming, according to the company. Between Fox News and Fox’s many television stations nationwide, the new Weather Channel competitor will have more than 75 meteorologists at its disposal. The platform will use radar systems — including a 3D radar — to give immediate and long-term forecasts.