Actress Drew Barrymore, Tom Ford’s film “A Single Man” and the TV show “Glee” were among the winners at Saturday nights GLAAD Media Awards, the 21st annual event presenting by the Gay and Lesbian Alliance Against Defamation.

The awards honor, in the words of GLAAD, “fair, accurate and inclusive stories of lesbian, gay, bisexual and transgender (LGBT) issues, people and allies that have increased awareness, understanding and respect for the lives of LGBT people.”

“A Single Man” was named Outstanding Film – Wide Release.” Its director, Ford, was stranded in London and could not attend; the award was accepted by his longtime partner, Richard Buckley.

“Glee” was named Outstanding Comedy Series.” In his acceptance speech, creator Ryan Murphy promised that the character of gay high schooler Kurt Hummel (played by openly gay actor Chris Colfer) would have a boyfriend next season. 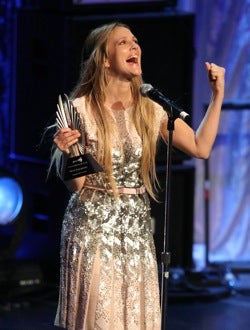 Barrymore, who was given the Vanguard Award, accepted her award after showing a video in which she listed her influential gay colleagues as including her agent, her lawyer and one of her dogs. (Photo by Angela Weiss/Getty Images)

Other GLAAD awards were presented at a separate March ceremony in New York City, while the final awards will be handed out in San Francisco in June.